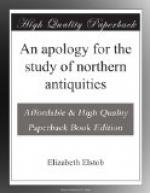 Get An apology for the study of northern antiquities from Amazon.com
View the Study Pack

An apology for the study of northern antiquities eBook

Elizabeth Elstob
This eBook from the Gutenberg Project consists of approximately 46 pages of information about An apology for the study of northern antiquities.

If I am mistaken herein, I beg Pardon:  I might alledge that which perhaps might be admitted for an Excuse, but that I will not involve the whole Sex, by pleading Woman’s Frailty.  I confess I thought it would be to little purpose to write an English Saxon Grammar, if there was nothing of Worth in that Language to invite any one to the study of it; so that I have only been upon the Defensive.  If any think fit to take up Arms against me, I have great Confidence in the Protection of the Learned, the Candid, and the Noble; amongst which, from as many as bear the Ensigns of St. George, I cannot doubt of that help, that true Chevalrie can afford, to any Damsel in Distress, by cutting off the Heads of all those Dragons, that dare but to open their Mouths, or begin to hiss against her.  But, Sir, before I conclude, I must do you the Justice to insert an extract of two Letters from the Right Honourable D.  P. to the Reverend Dr. R.  Taylor, relating to your Thesaurus.  Lingg.  Vett.  Septentrion. which indeed might more properly have been placed in the eighth Page of this Preface, had it come sooner to my Hands.  It is as follows,

—­“The Dean’s Present, which I shall value as long as I live for his sake. Dom.  Mabillon was the first that told me of that Work, and said, that the Author was a truly learned Person, and not one of those Writers who did not understand their Subject to the bottom, but, said he, that learned Man is one of ten thousand.”

[Footnote F:  See the Epistle to the Reader in the Essay towards
a Real Character, p. 3.]

And in another Letter to the abovemention’d Dr._ Taylor_—.  “When Dom.  Mabillon first told me of it, he did not name the Author, so as I understood who he was, but the Elogium he made of him, was indeed very great, and I find that the Dean in one Word, has done that worthy Man Justice.”  This high Elogium of your self, and of your great Work, from so renowned an Antiquary, as it is a great Defence and Commendation of the Old Northern Learning, so is it the more remarkable, in that it was given by one, against whom you had written in the most tender Point of the Controversy, De Re Diplomatica, as may be seen in your Lingg.  Vett.  Septentr.  Thesaur.  Praefat.  General. p. xxxvi, &c.

Sir, I once more heartily beg your Pardon for giving you so much trouble, and beg leave to give you my Thanks for the great Assistance I have received in the Saxon Studies from your learned Works, and Conversation; and in particular for your favourable Recommendation of my Endeavours, in a farther cultivating those Studies, who with sincere Wishes for your good Health, and all imaginable Respect for a Person of your Worth and Learning, am,

More summaries and resources for teaching or studying An apology for the study of northern antiquities.

An apology for the study of northern antiquities from Project Gutenberg. Public domain.