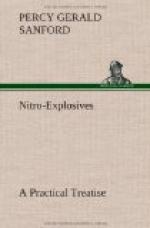 Get Nitro-Explosives: A Practical Treatise from Amazon.com
View the Study Pack

This eBook from the Gutenberg Project consists of approximately 310 pages of information about Nitro-Explosives.

The Nitro-Explosives—­Substances that have been Nitrated—­The Danger Area—­ Systems of Professors Lodge, Zenger, and Melsens for the Protection of Buildings from Lightning, &c.

The manufacture of the various nitro-explosives has made great advances during late years, and the various forms of nitro-compounds are gradually replacing the older forms of explosives, both for blasting purposes and also for propulsive agents, under the form of smokeless powders.  The nitro-explosives belong to the so-called High Explosives, and may be defined as any chemical compound possessed of explosive properties, or capable of combining with metals to form an explosive compound, which is produced by the chemical action of nitric acid, either alone or mixed with sulphuric acid, upon any carbonaceous substance, whether such compound is mechanically mixed with other substances or not.[A]

The number of compounds and mixtures included under this definition is very large, and they are of very different chemical composition.  Among the substances that have been nitrated are:—­Cellulose, under various forms, e.g., cotton, lignin, &c. glycerine, benzene, starch, jute, sugar, phenol, wood, straw, and even such substances as treacle and horse-dung.  Some of these are not made upon the large scale, others are but little used.  Those of most importance are nitro-glycerine and nitro-cellulose.  The former enters into the composition of all dynamites, and several smokeless powders; and the second includes gun-cotton, collodion-cotton, nitrated wood, and the majority of the smokeless powders, which consist generally of nitro-cotton, nitro-lignin, nitro-jute, &c. &c., together with metallic nitrates, or nitro-glycerine.

The nitro-explosives consist generally of some organic substance in which the no_{2} group, known as nitryl, has been substituted in place of hydrogen.

which is a tri-hydric alcohol, and which occurs very widely distributed as the alcoholic or basic constituent of fats, the hydrogen atoms are replaced by the no_{2} group, to form the highly explosive compound, nitro-glycerine.  If one atom only is thus displaced, the mono-nitrate is formed thus,

More summaries and resources for teaching or studying Nitro-Explosives: A Practical Treatise.