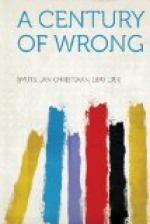 But notwithstanding the Free State Convention, notwithstanding the renewed promises of the Aliwal Convention[20]—­the Free State was forced to suffer a third breach of the Convention at the hands of the English.  Ten thousand rifles were imported into Kimberley through the Cape Colony, and sold there to the natives who encircled and menaced the two Dutch Republics.[21] General Sir Arthur Cunynghame, the British Commander-in-Chief in South Africa, admits that 400,000 guns were sold to Kaffirs during his term of office.  Protests from the Transvaal and the Free State were of no avail.[22] And when the Free State in the exercise of its just rights stopped waggons laden with guns on their way through its territory, it was forced to pay compensation to the British Government.

“The Free State,” says the historian Froude, “paid the money, but paid it under protest, with an old-fashioned appeal to the God of Righteousness, whom, strange to say, they believed to be a reality.”

It seems thus that there is no place for the God of Righteousness in English policy.

So far we have considered our Exodus from the Cape Colony, and the way in which we were deprived of Natal and the Free State by England.  Now for the case of the Transvaal.

The disastrous fate of the Trichardt Trek has already been told.  The Trichardts found the Transvaal overrun by the warriors of Moselikatse, the King of the Matabele and father of Lobengula.  The other tribes of the Transvaal were his “dogs,” according to the Kaffir term.

As soon as he heard of the approach of the emigrant Boers he sent out an army to exterminate them.  This army succeeded in cutting off and murdering one or two stragglers, but it was defeated at Vechtkop by the small laager of Sarel Celliers, where the Boer women distinguished themselves by deeds of striking heroism.

Shortly afterwards the emigrant Boers journeyed across the Vaal River, and after two battles drove Moselikatse and his hordes across the Limpopo right into what is now Matabeleland.  Andries Pretorius had come into the Transvaal after the Annexation of Natal, and lived there quietly, notwithstanding the price which had been put on his head after Boomplaats.  The British Resident in the Free State, which at this time