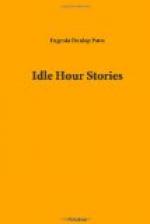 Get Idle Hour Stories from Amazon.com
View the Study Pack

This eBook from the Gutenberg Project consists of approximately 193 pages of information about Idle Hour Stories.

Five years passed away when on a gloomy afternoon in the autumn, Jessie Forrester, now a woman of thirty, and wearing her years and honors well, was sitting at her desk in an elegant sanctum, absorbed in the fate of two lovers whose history she was creating.

Her door opened and a grave, handsome man with a bearded face stood before her.

“Madam,” he said briefly “you once did my brother a great favor.  I am here to thank you for it.”

His brother?  A favor?  Ah, she had been doing favors for many in all these years.  She did not remember any particular one; it was an every day matter.  Every mail brought petitions and she never turned a deaf ear.  The doing of favors brought its own reward.

She looked steadily at the stranger, and he felt again in his inmost soul the gaze of those large brown eyes seen once before dilated with childish terror.

“My name is Garrett,” he explained, as briefly as before.

Garrett—­that hated name.  Involuntarily her eyes fell upon the work before her, while a warm flush mantled her cheeks.

“May I sit down for five minutes?”

She again raised her eyes without speaking, and he seated himself, not looking at but beyond her as if her steady gaze unmanned him.

“Madam, my parents are dead.  I have come to offer you Deering Castle at your own price.  I should not presume to suggest it as a gift.  It is yours if you wish it.  I have heard so often,” and here his voice fell for very shame, “that you wanted it.  It was not then mine to dispose of; now there is no barrier; it is yours.  I will send my attorney to you.”

Rising he lingered a moment with a certain wistfulness suffusing his features, then made his way out ere Jessie could recover sufficiently to bid him stay.

Her faculties were in a tumult.  Deering Castle hers—­the estate of her fathers—­the venerated old home hers at last.  It almost took her breath away.  A Garrett was offering it.  That name hated all her life.  But did she hate it now?

There was no more work that day for the author.  Nor ever again did her genius shine out in rapturing periods till she drew inspiration from the grand environment of the old homestead.  Here Robert Garrett is not an unwelcome guest.  Young Herbert is in fact quite devoted to the grave, sedate man with the tender heart.  Will his benign influence one day still further cement the new friendship?

The air of the December day was soft and mild.  All the world was in the streets, glad of a respite from the late cold “snap,” which had brought out furs and heavy wraps.

Signora Cavada was taking her accustomed drive, chaperoned by a comfortable looking American woman; for this was an American city, and the famous prima donna was winning nightly laurels at the Louisville Opera House.