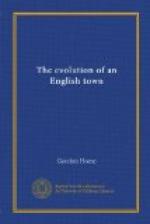 Get The Evolution of an English Town from Amazon.com
View the Study Pack

The Evolution of an English Town eBook

This eBook from the Gutenberg Project consists of approximately 218 pages of information about The Evolution of an English Town.

of Christ into Hades, represented by a great dragon’s jaw, is shown.  Adam holding an apple, and followed by Eve and many other spirits, is shown coming to meet our Lord.  Between the clerestory windows there are three paintings which seem to belong to a series associated with the Virgin Mary.  The first, which may represent the Assumption, has not been restored, and very little remains to be seen.  The second, according to Mr Keyser, shows the burial, and on the coffin appears the Jewish Prince Belzeray, who is said to have interfered with the funeral by raising himself astride the coffin.  The legend says that he became fixed to the pall, and only escaped after repentance and the united prayers of the apostles.

Of the third picture only a portion remains, the upper part being new plaster, but the figures of some of the apostles who are shown may have been standing by the deathbed of the Virgin.  The coronation scene already mentioned on the north side of the nave would thus complete a series of four pictures.

Just by the lectern at the north-east corner of the nave is a recumbent effigy of a knight wearing armour of the period when chain-mail was being exchanged for plate armour.  This was during the fourteenth century.  The arms on the shield are those of Bruce, and belonging to this period there has been discovered a license to Sir William Bruce to have a chantry in Pickering Church.  There can therefore be little doubt that this nameless effigy is that of Sir William Bruce.  The deed is dated “Saturday, the feast of St John the Evangelist, 1337,” and it states that a license was given in consideration of one messuage and two bovates of land in the village of Middleton near Pickering for a certain chaplain to celebrate “Divine (mysteries) daily in the Church of St Peter, Pickering (the full dedication is to God, St Peter, and St Paul), for the souls of the masters, William and Robert of Pickering, Adam de Bruce and Mathilda his wife.”  The two beautifully carved figures of a knight and his lady that lie in the Bruce Chapel are not Bruces for the surcoat of the man is adorned with the arms of the Rockcliffes—­an heraldic chess-rook and three lions’ heads.  Both the knight and his lady wear the collar of SS, the origin of which is still wrapped in obscurity.  Traces of gilding are visible in several places on the wings of the angels that support the heads of both figures, as well as in other parts of the carving where the detail is not obliterated.  The date of these monuments is believed to have been either the end of the fourteenth or the very beginning of the fifteenth centuries.  In the south-east corner of the north transept, almost hidden by deep shadows, there lies a truncated effigy of a man in armour of about the same period as that of Sir William Bruce, but there is nothing to identify these mutilated remains.  The sedilia in the chancel seem to be coeval with that part of the church.  They are ornamented with some curious carving and some heads, one of them, very much restored, representing apparently a bishop, priest, and deacon; the fourth head is a doubtful quantity.

More summaries and resources for teaching or studying The Evolution of an English Town.

The Evolution of an English Town from Project Gutenberg. Public domain.