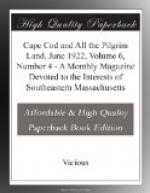 Get Cape Cod and All the Pilgrim Land, June 1922, Volume 6, Number 4 from Amazon.com
View the Study Pack

This eBook from the Gutenberg Project consists of approximately 76 pages of information about Cape Cod and All the Pilgrim Land, June 1922, Volume 6, Number 4.

The difference in spelling between the names “Wallfleet” and “Wellfleet” is not material.  Barnstable; town, county and bay, take their name from Barnstaple on the coast of Devon.  Norden, who was a highly educated man of University breeding, and a polished writer, varied the spelling of some words even in the same paragraph as witness “Crowch” and “Crouche,” also “Ilande” and “Island.”  The diversified spellings of many of our common names is so marked as to be beyond comment except to note their wide variety, due to attempts to follow the peculiar phonetics of untaught individuals.  In the one particular of “Well,” who of us has not heard that word pronounced “W-a-a-l.” when used as an interjection?  All of which makes it seem inescapable from the theory that Wellfleet on the Cape is named after Wallfleet on the coast of Essex, England.

A SQUEAK FOR A LIFE

“Whither bound?” said his wife to the captain one morn
As he stood, oars and fish lines in his hands,
“Outside Sandy Neck, to try fisherman’s luck
For bluefish, or mackerel or clams.”

“Good luck and good-bye,” said his fond loving wife,
“The weather looks pleasant and fair,
You’ll be back at the landing on the full of the tide,
And the children and I’ll wait you there.”

But when rounding Beach Point, with his good catch of fish,
The captain was caught in a squall,
Black clouds, wind and thunder, lightning and hail,
While the rain in torrents did fall.

Quick he lowered his sail, but the wind snapped his mast,
Away they went over the side.
One gunwale under water, the other in air,
Lifted high by the surging tide.

Then the captain braced himself as with sinews of steel,
A hand on each gunwale places he,
So he balanced and steadied his frail little craft,
Rolling there in the trough of the sea.

His wife from the window saw his peril in the storm.
And away to the landing she sped.
Tied her white linen apron to a handy boat book,
And waved it high o’er her head.

“Home, home for a lantern,” to the laddie she cried.
Home, home for the lantern ran he,
Returning, he swung it, back and forth, to and fro,
That his brave sailor father might see.

Soaked to the skin with the rain and the spray,
His face as white as the foam,
“Must I drown in sight of my wife,” he said,
“Must I die within reach of my home.”

Still darker grew the storm, black and green looked the waves,
The shore line to the captain grew dim,
But he knew by the lantern and the waving white flag,
Where his loved ones were watching for him.

More summaries and resources for teaching or studying Cape Cod and All the Pilgrim Land, June 1922, Volume 6, Number 4.