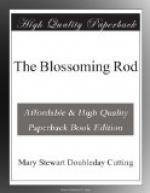 Get The Blossoming Rod from Amazon.com
View the Study Pack

This eBook from the Gutenberg Project consists of approximately 32 pages of information about The Blossoming Rod.

[Illustration:  He was out in the backyard ... flapping that rod in circles]

Mr. Langshaw had vaguely felt unusual preparations for a Christmas gift to him this year; he was always being asked for “change” to pay the children for services rendered.

It might have seemed a pity that calculation as to dollars and cents entered so much into the Christmas festivities of the family, if it were not that it entered so largely into the scheme of living that it was naturally interwoven with every dearest hope and fancy; the overcoming of its limitations gave a zest to life.  Langshaw himself, stopping now, as was his daily habit, to look at the display made by the sporting-goods shop on his way home the Friday afternoon before Christmas Monday, wondered, as his hand touched the ten-dollar bill in his pocket—­a debt unexpectedly paid him that day—­if the time had actually arrived at last when he might become the possessor of the trout-rod that stood in the corner of the window; reduced, as the ticket proclaimed, from fifteen dollars to ten.

The inspiration was the more welcome because the moment before his mind had been idly yet disquietingly filled with the shortcomings of George, his eldest child, and only son, aged ten, who didn’t seem to show that sense of responsibility which his position and advanced years called for—­even evading his duties to his fond mother when he should be constituting himself her protector.  He was worried as to the way George would turn out when he grew up.

This particular trout-rod, however, had an attraction for Langshaw of long standing.  He had examined it carefully more than once when in the shop with his neighbour, Wickersham; it wasn’t a fifty-dollar rod, of course, but it seemed in some ways as good as if it were—­it was expensive enough for him!  He had spoken of it once to his wife, with a craving for her usual sympathy, only to meet with a surprise that seemed carelessly disapproving.

“Why, you have that old one of your father’s and the bass-rod already; I can’t see why you should want another.  You always say you can’t get off to go fishing as it is.”

He couldn’t explain that to have this particular split bamboo would be almost as good as going on a fishing trip; with it in his hand he could feel himself between green meadows, the line swirling down the rushing brook.  But later Clytie had gone back to the subject with pondering consideration.

“Ten dollars seems an awful price for a rod!  I’m sure I could buy the same thing for much less uptown; wouldn’t you like me to see about it some day?”

“Great Scott!  Never think of such a thing!” he had replied in horror.  “I could get much cheaper ones myself!  If I ever have the money I’ll do the buying—­you hear?”

More summaries and resources for teaching or studying The Blossoming Rod.