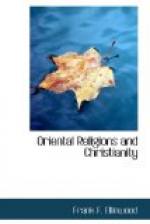 [Footnote 26:  Quoted by Uhlhorn in The Conflict of Christianity with Heathenism, p. 70.  He also quotes Seneca as saying:  “Oh, if one only might have a guide to truth!”]

[Footnote 27:  Plato showed by his writings and his whole life that he was a true seeker after the knowledge of God, whom he identified with the highest good.  Though he believed in an efficient creatorship, he held that matter is eternal.  Ideas are also eternal, but the world is generated.  He was not a Pantheist, as he clearly placed God outside of, or above, the universe.  He regarded the soul of man as possessed of reason, moral sensibility, and appetite.

On the doctrine of future immortality Plato was most emphatic.

He also believed that the soul in a previous state had been pure and sinless, but had fallen.  He taught that recovery from this fallen condition is to be accomplished by the pursuit of philosophy and the practice of virtue (not as merit but as discipline), by contemplating the highest ideal which is the character of God, and by thinking of eternity.  Plato regarded suffering as disciplinary when properly improved.  True philosophy may raise the soul above the fear of death.  This was proved by Socrates.  Both Socrates and Plato seemed to believe in a good demon (spirit) whose voice was a salutary and beneficent guide.  As to eschatology, Plato looked forward to a heaven where the virtuous soul shall dwell in the presence of God, and in the enjoyment of pure delights.

Aristotle’s idea of God was scarcely less exalted than that of Plato.  He expressed it thus:  “The principle of life is in God; for energy of mind constitutes life, and God is this energy.  He, the first mover, imparts motion and pursues the work of creation as something that is loved.  His course of life must be similar to what is most excellent in our own short career.  But he exists forever in this excellence, whereas this is impossible for us.  His pleasure consists in the exercise of his essential energy, and on this account vigilance, wakefulness, and perception are most agreeable to him.  Again, the more we examine God’s nature the more wonderful does it appear to us.  He is an eternal and most excellent being.  He is indivisible, devoid of parts, and having no magnitude, for God imparts motion through infinite time, and nothing finite, as magnitude is, can have an infinite capacity.  He is a being devoid of passions and unalterable.”—­Quoted in Indian Wisdom, p. 125.]

[Footnote 28:  “Those pages present not the image of this piety, the tears of confession, Thy sacrifice, a troubled spirit, a broken and a contrite heart, the salvation of the people, the Bridal city, the earnest of the Holy Ghost, the cup of our redemption.  No man sings there, ’Shall not my soul be submitted unto God? for of Him cometh my salvation, for He is my God and my salvation, my guardian, I shall no more be grieved.’  No one there hears Him call