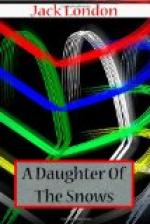 “Well; I was so close to the man, and my leap out of the bunk was so unexpected, that he missed me.  The next moment we grappled and rolled on the floor.  Of course, Borg was aroused, and the second man turned his attention to him and Bella.  It was this second man who did the killing, for my man, naturally, had his hands full.  You heard the testimony.  From the way the cabin was wrecked, you can picture the struggle.  We rolled and tossed about and fought till stools, table, shelves—­everything was smashed.

“Oh, Frona, it was terrible!  Borg fighting for life, Bella helping him, though wounded and groaning, and I unable to aid.  But finally, in a very short while, I began to conquer the man with whom I was struggling.  I had got him down on his back, pinioned his arms with my knees, and was slowly throttling him, when the other man finished his work and turned on me also.  What could I do?  Two to one, and winded!  So I was thrown into the corner, and they made their escape.  I confess that I must have been badly rattled by that time, for as soon as I caught my breath I took out after them, and without a weapon.  Then I collided with La Flitche and John, and—­and you know the rest.  Only,” he knit his brows in puzzlement, “only, I cannot understand why Bella should accuse me.”

He looked at her appealingly, and, though she pressed his hand sympathetically, she remained silent, weighing pro and con what she had heard.

She shook her head slowly.  “It’s a bad case, and the thing is to convince them—­”

“But, my God, Frona, I am innocent!  I have not been a saint, perhaps, but my hands are clean from blood.”

“But remember, Gregory,” she said, gently, “I am not to judge you.  Unhappily, it rests with the men of this miners’ meeting, and the problem is:  how are they to be convinced of your innocence?  The two main points are against you,—­Bella’s dying words and the blood on your sleeve.”

“The place was areek with blood,” St. Vincent cried passionately, springing to his feet.  “I tell you it was areek!  How could I avoid floundering in it, fighting as I was for life?  Can you not take my word—­”

“There, there, Gregory.  Sit down.  You are truly beside yourself.  If your case rested with me, you know you would go free and clean.  But these men,—­you know what mob rule is,—­how are we to persuade them to let you go?  Don’t you see?  You have no witnesses.  A dying woman’s words are more sacred than a living man’s.  Can you show cause for the woman to die with a lie on her lips?  Had she any reason to hate you?  Had you done her or her husband an injury?”

He shook his head.

“Certainly, to us the thing is inexplicable; but the miners need no explanation.  To them it is obvious.  It rests with us to disprove the obvious.  Can we do it?”

The correspondent sank down despondently, with a collapsing of the chest and a drooping forward of the shoulders.  “Then am I indeed lost.”