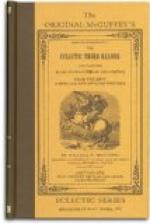 [Illustration:  Script Exercise:  There is a baby at Ned’s house.  Her name is Kate.  Ned is not a good boy, but he loves Kate, and I do not think he would hurt her. ]

light far its high where sea tall were

The tall house which you see on that high rock is a lighthouse.  At night its light is seen far out at sea, and the men on ships can tell where to go.

If it were not for this, they would run on the rocks.

How would you like to live in a lighthouse?

[Illustration:  Sheep grazing under a tree.  Two boys watching from fence in the background.]

Let us watch the sheep as they feed on the hills.  They like to eat the new grass.

Do you see my two lambs?  I had two more; but an old wolf took them one night.

I love my pet lambs.  It would be wrong to hurt them

The boys have made a big snow man.

They have put a tall hat on his head, and an old pipe in his mouth.

Hear them laugh as they play!

It is good fun for the boys.

They would like to have it snow all day and all night.

“Buzz! buzz! buzz!” but Mary could not tell its wants.

I think it said, “Please let me get some sweets in this vine.

One day Nat and I sat on the high hill by the sea, where the tall lighthouse stands.  We could look far out, and could see the ships at sea.

As we sat there, we saw a man near by, with some sheep and lambs.  The man had a pipe in his mouth.  He sat with us, and let the sheep eat the grass.

What fun it is to see lambs play!  It made us laugh to see them.

The man said that once, when the sheep and lambs were out in the snow, an old wolf took one of the lambs, and ran off with it.

I think that men should watch their sheep, so that a wolf can not catch them.