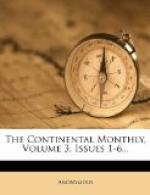 This eBook from the Gutenberg Project consists of approximately 318 pages of information about Continental Monthly.

’The Yankees have at last arrived, about ten thousand strong.  For the past two days we have had some sharp skirmishing, during which time we have killed one hundred of the Hessians.  We have, as yet, lost but one man.’

In a private note to the editor, the writer adds:—­

’I guess the Yankees have got us this time.  There is a regiment here who call themselves the Indiana Ninth, but they lie,—­they are regulars.  They have got good rifles, and they take good aim.  If it wasn’t for this, we would attack them.’

This little item shows how the masses of the Southern people are deceived.  Through the medium of the press they are made to believe they are gaining great victories, and repulsing the ‘abolitionists’ at every step, killing hundreds of our men, and losing none of their own.  Our total loss at Laurel Hill was six men.  The rebel loss, as near as could be ascertained, was forty.  The rebel leaders know they are playing a game for life or death, and so long as they can keep in power by deceiving the people, just so long will this rebellion continue.  Could the truth be forced upon the people of the South, the rebellion would go down as quickly as it rose.

Many laughable incidents occurred while we were skirmishing with the enemy at Laurel Hill.  We received a newspaper containing the message of President Lincoln.  One of the Indiana boys, thinking it might do the secesh good to hear a few loyal sentiments, mounted a stump, paper in hand, and exclaimed, ’I say, secesh, don’t you want to hear old Abe’s message?’ He then commenced reading, but had proceeded only a short way, before ‘ping, ping’ came the rifle balls around the stump; down jumped Indiana, convinced that reading even a President’s message amidst a shower of bullets isn’t so agreeable, after all.

We staid at Laurel Hill about two weeks.  The enemy had been completely routed from that part of Virginia, and our term of enlistment having expired, our thoughts began to turn homeward.  That ninety days’ soldiering was the longest three months we ever experienced.  It seemed an age since we had tasted a good meal, and all were anxious to once more cross the Ohio, and see a civilized country.  The long looked-for order came at last, ‘’Bout face!’ and we were on our homeward march.  A more jovial, ragged, dirty, and hungry set of men, were never mustered out of service.  We reached Camp Chase at Columbus, Ohio, about the last of July, and as each man delivered up his knapsack and etceteras, he felt as if a ‘great weight’ had been taken from his shoulders.  We were once more free men; no one could order us about, tell us where we should or where we should not go.  There was no more touching of hats to upstart lieutenants and half-witted captains or colonels.  We could go where we liked, and do as we pleased, and not be reported, or sent to the guard-house.  If my memory serves me aright, we did do pretty much as we pleased; in other words, for two days, ‘we made Rome howl!’