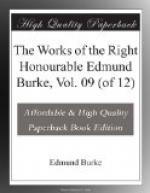 Get The Works of the Right Honourable Edmund Burke, Vol. 09 (of 12) from Amazon.com
View the Study Pack

The Works of the Right Honourable Edmund Burke, Vol. 09 (of 12) eBook

Edmund Burke
This eBook from the Gutenberg Project consists of approximately 486 pages of information about The Works of the Right Honourable Edmund Burke, Vol. 09 (of 12).

That the said Sulivan was soon after appointed back again by the said Warren Hastings to the office of Resident at the Durbar of the said Nabob of Arcot.  That it was a high crime and misdemeanor in the said Hastings to encourage so dangerous an example in the Company’s service, and to interfere unnecessarily with the government of Madras in the discharge of the duties peculiarly ascribed to them by the practice and orders of the Company, for the purpose of appointing to a great and confidential situation a man who had so recently committed a breach of trust to his employers.

That the Court of Directors, in their letter to Bengal, dated the 12th of July, 1782, and received there on the 18th of February, 1783, did condemn and revoke the said appointment.  That the said Directors, in theirs to Fort St. George, dated the 28th of August, 1782, and received there the 31st of January, 1783, did highly condemn the conduct of the said Sulivan, and, in order to deter their servants from practices of the same kind, did dismiss him from their service.

That, even admitting, what is highly improbable, that the dismission of the said Sulivan from the service of the said Company was not known at Calcutta in forty-three days from Madras, the last-mentioned nomination of the said Sulivan was made at least in contempt of the censure already expressed by the Court of Directors at his former appointment to the Durbar of the Nabob of Arcot, and which was certainly known to the said Hastings.

That on the 2d of December, 1779, the Governor-General and Council of Fort William, at the special recommendation and instance of Warren Hastings, Esquire, then Governor-General, and contrary to the declared opinion and protest of three of the members of the Council, viz., Philip Francis and Edward Wheler, Esquires, who were present, and of Sir Eyre Coote, who was absent, (by whose absence the casting voice of the said Warren Hastings, Esquire, prevailed,) did conclude a treaty of perpetual friendship and alliance, offensive and defensive, with a Hindoo prince, called the Ranna of Gohud, for the express purpose of using the forces of the said Ranna in opposition to the Mahrattas.

More summaries and resources for teaching or studying The Works of the Right Honourable Edmund Burke, Vol. 09 (of 12).

The Works of the Right Honourable Edmund Burke, Vol. 09 (of 12) from Project Gutenberg. Public domain.