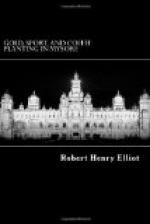 The pioneer planters of Southern Mysore.

The life of a planter by no means a dull one.

Effects of English capital on the progress of the people and the
finances of the State.

The value, in times of famine, of European settlers.

A deferred native message of thanks to the English public.

The causes that have led to an increase of famine and scarcities.

Measures to promote the digging of wells by the people.

A line of railway from Mysore to the western coast sanctioned.

Wanted, land tenures which will promote well digging and other
irrigation works.

The late Dewan’s opinions in favour of a fixed land tax.

Evidences of irrigation works made by occupiers being promoted by
a fixed land tax.

Famine question of great importance to settlers in India.

The number of European and native coffee plantations in Mysore.

Endeavours by the Dewan to develop the iron wealth of the
province.

“The Mysore and Coorg Directory.”  Value of the Dewan’s annual
addresses in the Representative Assembly.

The Dewan’s efforts to promote improvements of all kinds.

European settlers favourably received by officials of all
classes.

Hints as to representing any matter to a Government official.

Native officials are polite and obliging.

General description of the Mysore country.

The climate.  A healthy one for Europeans.

The beautiful scenery of the western borderlands.

Height of the falls; difficulty of getting at them; the
Lushington, Lalgali, and Majod Falls might be visited-when on the
way to Gairsoppa Falls.

The best time for visiting the falls.

Description of the falls.

Startling sounds to be heard at the falls.

To the bottom of the gorge below the falls.

Wonderful combinations of sights and sounds.

The scene on the pool above the falls.

A flying squirrel; a tiger bounding across the road.

The Cauvery Falls and the route to them.

General description of the falls.

The Gairsoppa and Cauvery Falls contrasted.