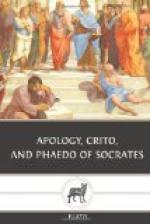 Get Apology, Crito, and Phaedo of Socrates from Amazon.com
View the Study Pack

Plato
This eBook from the Gutenberg Project consists of approximately 185 pages of information about Apology, Crito, and Phaedo of Socrates.

After he had bathed, and taken leave of his children and the women of his family the officer of the Eleven comes in to intimate to him that it is now time to drink the poison.  Crito urges a little delay, as the sun had not yet set; but Socrates refuses to make himself ridiculous by showing such a fondness for life.  The man who is to administer the poison is therefore sent for; and on his holding out the cup, Socrates, neither trembling nor changing color or countenance at all, but, as he was wont, looking steadfastly at the man, asked if he might make a libation to any one; and being told that no more poison than enough had been mixed, he simply prayed that his departure from this to another world might be happy, and then drank off the poison, readily and calmly.  His friends, who had hitherto with difficulty restrained themselves, could no longer control the outward expressions of grief, to which Socrates said, “What are you doing, my friends?  I, for this reason, chiefly, sent away the women, that they might not commit any folly of this kind; for I have heard that it is right to die with good omens.  Be quiet, therefore, and bear up.”

When he had walked about for a while his legs began to grow heavy, so he lay down on his back; and his body, from the feet upward, gradually grew cold and stiff.  His last words were, “Crito, we owe a cock to AEsculapius; pay it, therefore, and do not neglect it.”

“This,” concludes Phaedo, “was the end of our friend—­a man, as we may say, the best of all his time, that we have known, and, moreover, the most wise and just.”

PHAEDO;
OR,
THE IMMORTALITY OF THE SOUL.

Ech. Were you personally present, Phaedo, with Socrates on that day when he drank the poison in prison, or did you hear an account of it from some one else?

Ech. What, then, did he say before his death, and how did he die? for I should be glad to hear:  for scarcely any citizen of Phlius[25] ever visits Athens now, nor has any stranger for a long time come from thence who was able to give us a clear account of the particulars, except that he had died from drinking poison; but he was unable to tell us any thing more.

2. Phaed. And did you not hear about the trial—­how it went off?

Ech. Yes; some one told me this; and I wondered that, as it took place so long ago, he appears to have died long afterward.  What was the reason of this, Phaedo?

More summaries and resources for teaching or studying Apology, Crito, and Phaedo of Socrates.