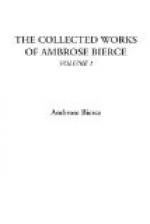 Get The Collected Works of Ambrose Bierce, Volume 1 from Amazon.com
View the Study Pack

Ambrose Bierce
This eBook from the Gutenberg Project consists of approximately 267 pages of information about The Collected Works of Ambrose Bierce, Volume 1.

In addition to these ravages of the dog in his normal state are a vastly greater number of outrages committed by the sacred animal in the fury of insanity, for he has an hereditary tendency to madness, and in that state his bite is incurable, the victim awaiting in the most horrible agony the sailing of the next ship to the Isle of the Happy Change, his suffering imperfectly medicined by expressions of public sympathy for the dog.

A cynical citizen of Gumammam said to the writer of this narrative:  “My countrymen have three hundred kinds of dogs, and only one way to hang a thief.”  Yet all the dogs are alike in this, that none is respectable.

Withal, it must be said of this extraordinary people that their horrible religion is free from the hollow forms and meaningless ceremonies in which so many superstitions of the lower races find expression.  It is a religion of love, practical, undemonstrative, knowing nothing of pageantry and spectacle.  It is hidden in the lives and hearts of the people; a stranger would hardly know of its existence as a distinct faith.  Indeed, other faiths and better ones (one of them having some resemblance to a debased form of Christianity) co-exist with it, sometimes in the same mind.  Cynolatry is tolerant so long as the dog is not denied an equal divinity with the deities of other faiths.  Nevertheless, I could not think of the people of Ganegwag without contempt and loathing; so it was with no small joy that I sailed for the contiguous island of Ghargaroo to consult, according to my custom, the renowned statesman and philosopher, Juptka-Getch, who was accounted the wisest man in all the world, and held in so high esteem that no one dared speak to him without the sovereign’s permission, countersigned by the Minister of Morals and Manners.

A CONFLAGRATION IN GHARGAROO

Through the happy accident of having a mole on the left side of my nose, as had also a cousin of the Prime Minister, I obtained a royal rescript permitting me to speak to the great Juptka-Getch, and went humbly to his dwelling, which, to my astonishment, I found to be an unfurnished cave in the side of a mountain.  Inexpressibly surprised to observe that a favorite of the sovereign and the people was so meanly housed, I ventured, after my salutation, to ask how this could be so.  Regarding me with an indulgent smile, the venerable man, who was about two hundred and fifty years old and entirely bald, explained.

Translated, these mean, respectively, “The poor are blessed,” and, “Heaven is not easily entered by those who are rich.”

I asked Juptka-Getch if his countrymen really gave to these texts a practical application in the affairs of life.

More summaries and resources for teaching or studying The Collected Works of Ambrose Bierce, Volume 1.