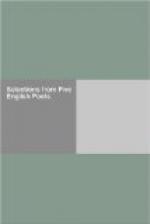 It is an ancient Mariner,
And he stoppeth one of three,
“By thy long grey beard and glittering eye,
Now wherefore stopp’st thou me?

“The Bridegroom’s doors are opened wide, 5
And I am next of kin;[1]
The guests are met, the feast is set:
Mayst hear the merry din.”

He holds him with his glittering eye—­
The Wedding-Guest stood still,
And listens like a three years’ child:[5] 15
The Mariner hath his will.

The Wedding-Guest sat on a stone:
He cannot choose but hear;
And thus spake on that ancient man,
The bright-eyed Mariner. 20

“The ship was cheered, the harbor cleared,
Merrily did we drop
Below the kirk,[6] below the hill,
Below the lighthouse top.

“The Sun came up upon the left,[7]
Out of the sea came he! 25
And he shone bright, and on the right
Went down into the sea.

The bride hath paced into the hall,
Red as a rose is she;
Nodding their heads before her goes 35
The merry minstrelsy.

The Wedding-Guest he beat his breast,
Yet he cannot choose but hear;
And thus spake on that ancient man,
The bright-eyed Mariner. 40

“And now the Storm-blast came, and he
Was tyrannous and strong:
He struck with his o’ertaking wings,
And chased us south along.

“With sloping masts and dipping prow, 45
As who pursued with yell and blow
Still treads the shadow of his foe,
And forward bends his head,
The ship drove fast, loud roared the blast,
And southward aye we fled. 50

“And now there came both mist and snow,[8]
And it grew wondrous cold:
And ice, mast-high, came floating by,
As green as emerald.

“And through the drifts the snowy clifts[9] 55
Did send a dismal sheen:
Nor shapes of men nor beasts we ken[10]—­
The ice was all between.

“The ice was here, the ice was there,
The ice was all around:  60
It cracked and growled, and roared and howled,
Like noises in a swound![11]