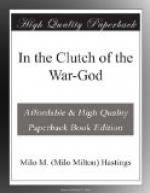 Get In the Clutch of the War-God from Amazon.com
View the Study Pack

In the Clutch of the War-God eBook

This eBook from the Gutenberg Project consists of approximately 56 pages of information about In the Clutch of the War-God.

Title:  In the Clutch of the War-God

Produced by Roger Taft, grandson of the author, and
Jim Tinsley.

In the Clutch of the War-God

In the Clutch of the War-God

The tale of the ORIENT’S invasion of the Occident, as chronicled in the humaniculture society’s “History of the twentieth century”

Foreword:  In this strange story of another day, the author has “dipped into the future” and viewed with his mind’s eye the ultimate effect of America’s self-satisfied complacency, and her persistent refusal to heed the lessons of Oriental progress.  I can safely promise the reader who takes up this unique recital of the twentieth century warfare, that his interest will be sustained to the very end by the interesting deductions and the keen insight into the possibilities of the present trend of international affairs exhibited by the author.—­Bernarr Macfadden.

“Kindly be prepared to absent yourself at a moment’s notice.”  It was Goyu speaking, blundering, old fool.  He was standing in the doorway with his kitchen-apron on, and an iron spoon in his hand.

“What on earth is the matter?” asked Ethel Calvert, tossing aside her French novel in alarm, for such a lack of deference in Goyu meant vastly more than appeared upon the surface.

“I am informed,” replied Goyu, gravely, “that there has been an anti-foreign riot and that many are killed.”

“He was upon the grain boat,” said Goyu.

“I do not know,” returned Goyu, locking nervously over his shoulder.  “But I fear he has not fared well—­the boat was dynamited—­that’s what started the trouble.”

With a gasp Ethel recalled that an hour before she had heard an explosion which she had supposed to be blasting.  Faint with fear, she staggered toward a couch and fell forward upon the cushions.

When the girl regained consciousness the house was dark.  Slowly she recalled the event that had culminated the uneventful day.  She wondered if Goyu had been lying or had gone crazy.  The darkness was not reassuring—­her father always came home before dark, and his absence now confirmed her fears.  She wondered if the old servant had deserted her.  He was a poor stick anyway; Japanese men who had pride or character no longer worked as domestics in the households of foreigners.

More summaries and resources for teaching or studying In the Clutch of the War-God.

In the Clutch of the War-God from Project Gutenberg. Public domain.