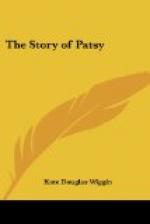 “Then some one has ‘chucked’ it into the next yard, and the janitor will have to climb the fence,—­at his age!  Oh, if I could eliminate the irregular verb ‘to chuck’ from the vocabulary of this school, I could ’make out of the broken sounds of life a song, and out of life itself a melody,’” and she flew down-stairs like a breeze, to find the patient Mr. Bowker.  Mr. Bowker was a nice little man, who had not all his wits about him, but whose heart was quite intact, and who swept with energy and washed windows with assiduity.  He belonged to the Salvation Army, and the most striking articles of his attire, when sweeping, were a flame-colored flannel shirt and a shiny black hat with “Prepare to Meet Thy God” on the front in large silver letters.  The combination of color was indescribably pictorial, and as lurid and suggestive as an old-fashioned Orthodox sermon.

As I went through the lower hall, I found Mr. Bowker assisting Helen to search the coal-bin.  “Don’t smile,” she cried.  “Punch says, ’Sometimes the least likeliest place is more likelier than the most likeliest,’—­and sure enough, here is the hat!  I should have been named Deborah or Miriam,—­not Helen!” and she hurried to dry the tears of the weeping Jacob.

I SEEK PATSY, AND MEET THE DUCHESS OF ANNA STREET.

I make my way through the streets, drinking in the glorious air, breathing the perfume of the countless fruit stands and the fragrances that floated out from the open doors of the little flower stores in every block, till I left all that was pleasant behind me and turned into Anna Street.

I soon found Number 32, a dirty, tumble-down, one-story hovel, the blinds tied together with selvedges of red flannel, and a rickety bell that gave a certain style to the door, though it had long ceased to ring.

A knock brought a black-haired, beetle-browed person to the window.

“Wall, I ruther guess not!” This in a tone of such royal superiority and disdain that I saw in an instant I had mistaken blue blood for red.

“I must have been misinformed, then.  This is Number 32?”

“Yes,” meekly.  “I thought perhaps Anna Street had been numbered over.”

“A little girl brought me her name written on a card,—­Mrs. Kennett, 32 Anna Street.”

“There!” triumphantly, “I might ’a knowed that woman ’d play some common trick like that!  Now do you want ter know where Mis’ Kennett re’ly doos live?  Wall, she lives in the rear!  Her number’s 32-1/2, ’n I vow she gits more credit o’ livin’ in the front house ’n I do, ’n I pay four dollars more rent!  Ever see her?  I thought not!  I guess ’f you hed you wouldn’t think of her livin’ in a house like this!”