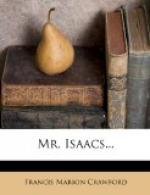 Get Mr. Isaacs from Amazon.com
View the Study Pack

Francis Marion Crawford
This eBook from the Gutenberg Project consists of approximately 298 pages of information about Mr. Isaacs.

never exceeded sixteen rupees a month as scribe and Arabic interpreter, and I went my way with about two thousand rupees in cash and precious stones.  I came northwards, and finally settled in Delhi, where I set up as a dealer in gems and objects of intrinsic value.  It is now twelve years since I landed in Bombay.  I have never soiled my hands with usury, though I have twice advanced large sums at legal interest for purposes I am not at liberty to disclose; I have never cheated a customer or underrated a gem I bought of a poor man, and my wealth, as you may judge from what you have seen, is considerable.  Moreover, though in constant intercourse with Hindus and English, I have not forfeited my title to be called a true believer and a follower of the prophet, whose name be blessed.”

Isaacs ceased speaking, and presently the waning moon rose pathetically over the crest of the mountains with that curiously doleful look she wears after the full is past, as if weeping over the loss of her better half.  The wind rose and soughed drearily through the rhododendrons and the pines; and Kiramat Ali, the pipe-bearer, shivered audibly as he drew his long cloth uniform around him.  We rose and entered my friend’s rooms, where the warmth of the lights, the soft rugs and downy cushions, invited us temptingly to sit down and continue our conversation.  But it was late, for Isaacs, like a true Oriental, had not hurried himself over his narrative, and it had been nine o’clock when we sat down to smoke.  So I bade him good-night, and, musing on all I had heard and seen, retired to my own apartments, glancing at Sirius and at the unhappy-looking moon before I turned in from the verandah.

In India—­in the plains—­people rise before dawn, and it is not till after some weeks’ residence in the cooler atmosphere of the mountains that they return to the pernicious habit of allowing the sun to be before them.  The hours of early morning, when one either mopes about in loose flannel clothes, or goes for a gallop on the green maidan, are without exception the most delicious of the day.  I shall have occasion hereafter to describe the morning’s proceedings in the plains.  On the day after the events recorded in the last chapter I awoke as usual at five o’clock, and meandered out on to the verandah to have a look at the hills, so novel and delicious a sight after the endless flats of the northwest provinces.  It was still nearly dark, but there was a faint light in the east, which rapidly grew as I watched it, till, turning the angle of the house, I distinguished a snow-peak over the tops of the dark rhododendrons, and, while I gazed, the first tinge of distant dawning caught the summit, and the beautiful hill blushed, as a fair woman, at the kiss of the awakening sun.  The old story, the heaven wooing the earth with a wondrous shower of gold.

More summaries and resources for teaching or studying Mr. Isaacs.