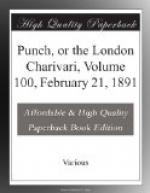 What is this the Baron reads in the D.T. of Feb. 9, and in the Daily Graphic of the same date?  Here is a portion of the extract from the D.T.:—­“The Monthly Meeting of that quaint Literary Society, ‘Ye Odd Volumes,’ at Limmer’s Hotel, brought together not merely a goodly show of the Volumes themselves, but an unusually large array of visitors,” and then follows the distinguished list, the crowning point being reached when we come to the name of “The Baron de BOOK-WORMS of Punch,” and in the Daily Graphic the daring reporter goes a step farther, as, after giving the name of a certain honoured guest, he parenthetically explains that this academical convive is the “Baron de B.-W.!” Erreur!  I, the Baron de B.-W., being of sound mind and body, hereby declare that the Baron himself was not present.  And why?  Well, do my readers remember the honest milk-maid’s retort to the coxcomb who said he wouldn’t marry her?  Good.  Then, substituting “me” for “you,” and “he” for “she,” the Baron can adopt the maiden’s reply.  After this, other reasons would be superfluous.

How came the reporter to fall into so great an error?  Who misinformed him?  A worthy henchman, as indignant as was Sam Weller when he found his beloved master’s name trifled with, writes to ask me, “Ain’t nobody to be whopped for takin’ this here liberty, Sir?” With the immortal Mr. Pickwick, the Baron replies, “Certainly not.  Not on any account.”  And, whatever that sturdy henchman may murmur to himself, he at once obeys.  “Bring me my books!” cries the Baron, “I am off to the review.”

The Baron’s Deputy writes, that he has again been steeping himself in poetry, and reports as follows:—­Ionica (GEORGE ALLEN) is a little volume, which no admirer of true poetry should fail to possess.  The author now calls himself W. CORY, but he was known by a different name to many generations of Etonians.  His Muse generally wears a classical robe, but her speech is always delightfully musical.  She has beautiful cadences, that haunt the memory like some old Volkslied.  In spite of a careless confusion between “thou” and “you,” I defy anybody to read “Heraclitus,” to take only one instance, without a sense of pleasure which will compel him to learn the two verses by heart.  But the Muse is pathetic, playful, and patriotic, too, when the occasion fits, and, whatever she sings, she sings with genuine taste and feeling.  Would that we might hope for more of her pure music.  So far the Deputy.

Was that excentric character in David Copperfield nameless, who was represented as sitting in some sort of slop-shop, wheezing out fiercely, “O my lights and liver!  O goroo, goroo!” I think DICKENS didn’t give him a name, good or bad; but his constant repetition of the above outlandish exclamations has impressed upon him an awful and terrific personality, which places him among the more popular creations