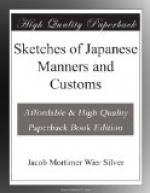 Get Sketches of Japanese Manners and Customs from Amazon.com
View the Study Pack

This eBook from the Gutenberg Project consists of approximately 51 pages of information about Sketches of Japanese Manners and Customs.

The stage is a little smaller than ours, but sometimes has a promenade through the centre of the theatre, which facilitates by-play, to which the Japanese attach great importance.  The body of the house is divided into boxes, which are generally taken by family parties, who bring their provisions with them and remain all day, as the performances begin about 10 A.M. and last until late in the evening.  Their plays are very tedious, although enlivened by a good deal of smart repartee and telling jokes, but the morality even of the most correct is very questionable.  Love, of course, is the prevailing feature; and the adventures of the principal heroes contain enough bloodshed and murder to satisfy the most ardent admirer of sensation dramas.  In their hand-to-hand encounters they cut and slash at one another with naked swords, which they manage very skilfully, never permitting the blades to come into contact.  The female parts are performed by boys and young men, who, with the assistance of paint and powder, make admirable substitutes for women, though singing and dancing-girls are frequently introduced as divertissements.

[Illustration:  Interior of A theatre.]

[Illustration:  Getting ready to go to the Theatre.]

Kite-flying is also a favourite amusement; and old age and childhood may frequently be seen side-by-side, tugging at soaring monsters, in the construction of which great ingenuity is displayed.

The Japanese often play with cards, which are about a quarter of the size of ours; and they are much given to gambling, although it is strictly prohibited, and, when detected, severely punished.  But the most popular in-door game is & sort of combination of draughts and chess, which frequently engrosses the players for hours at a time.

Crimes against property are rare in Japan, which is owing to the high-spirited and honourable feelings that actuate all classes of the community; but from the feudal nature of the government, the small value attached to life, and the deadly weapons constantly carried, by the military classes, who are notoriously proud and revengeful, crimes against the person are very frequent.

A great check upon criminal offences is the severity of the punishments inflicted, and the disgrace entailed upon the culprit’s family.

Although the laws are extremely severe, and in their administration there is neither jury nor counsel, justice is delivered with great impartiality; and the judge, who is generally the governor of the town or district in which the offence has been committed, is entrusted with considerable discretionary power.

When a prisoner is being examined his arms are bound to his sides by a rope, which also passes round his neck, the end of which is held by an official, who, if his charge prove unruly, manages him by pulls and jerks.

More summaries and resources for teaching or studying Sketches of Japanese Manners and Customs.