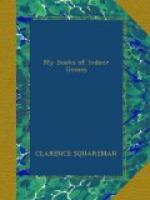 Get My Book of Indoor Games from Amazon.com
View the Study Pack

My Book of Indoor Games eBook

This eBook from the Gutenberg Project consists of approximately 138 pages of information about My Book of Indoor Games.

THE GAME OF CAT

The person who is to play the part of Cat should stand outside the door of the room where the company is assembled.  The boys and girls, in turn, come to the other side of the door and call out “miaou.”  If the Cat outside recognizes a friend by the cry, and calls out her name correctly in return, he is allowed to enter the room and embrace her, and the latter then takes the place of Cat.  If, on the contrary, the Cat cannot recognize the voice, he is hissed, and remains outside until he does.

Living pictures are very amusing if well carried out, and even with little preparation may be made very pretty or very comical, whichever may be desired.  It is perhaps better to attempt comical ones if you have not much time in which to arrange them, as the costumes are generally easier to manage, and if you are obliged to use garments not quite in keeping with the characters, it does not matter much; indeed, it will probably only make the audience laugh a little more.

The great thing in living pictures is to remain perfectly still during the performance.  You should select several well-known scenes either from history or fiction, and then arrange the actors to represent the scenes as nearly as possible.

Simple home living pictures are a great source of fun, and many a wet afternoon will pass like magic while arranging scenes and making dresses to wear.  Newspaper masks, newspaper cocked hats, old shawls, dressing-gowns, and sticks are quite sufficient for home charades.

Suppose, for instance, you think of “Cinderella” for one tableau.  One girl could be standing decked out with colored tissue paper over her frock, and with paper flowers in her hair, to represent one of the proud sisters, while Cinderella in a torn frock is arranging the other proud sister’s train, which may consist of an old shawl.  Bouquets of paper flowers should be in the sister’s hands.

“Little Red Riding Hood” is another favorite subject for a living picture.  The wolf may be represented by a boy on his hands and knees, with a fur rug thrown over him.  Red Riding Hood only requires a scarlet shawl, arranged as a hood and cloak, over her ordinary frock and pinafore, and she should carry a bunch of flowers and a basket.

All living pictures look better if you can have a frame for them.  It is not very difficult to make one, especially if you have four large card-board dress-boxes.

Having carefully cut out the bottoms of the boxes, place the frames as here shown:

Cut out the center framework, leaving a large square, so:

More summaries and resources for teaching or studying My Book of Indoor Games.

My Book of Indoor Games from Project Gutenberg. Public domain.