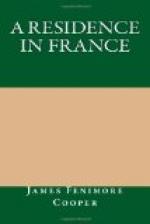 Get A Residence in France from Amazon.com
View the Study Pack

A Residence in France eBook

James Fenimore Cooper
This eBook from the Gutenberg Project consists of approximately 393 pages of information about A Residence in France.

America has undergone the ordinary changes, such as growth, extension of interests, and the other governing circumstances of society, that properly belong to two centuries, within the last fifty years.  America to-day, in all but government, is less like the America of 1776, than the France of to-day is like the France of 1600.  While it is the fashion to scout our example as merely that of an untried experiment, ours is fast getting to be the oldest political system in Christendom, as applied to one and the same people. Nations are not easily destroyed,—­they exist under a variety of mutations, and names last longer than things; but I now speak in reference to distinguishing and prominent facts, without regard to the various mystifications under which personal interests disguise themselves.

A little incident has lately impressed me with the great wealth of this quarter of the world in wines, as compared with our own poverty.  By poverty, I do not mean ignorance of the beverage, or a want of good liquors; for I believe few nations have so many varieties, or varieties so excellent, as ourselves.  Certainly it is not common to meet as good Bordeaux wines in Paris as in New York.  The other good liquors of France are not so common; and yet the best Burgundy I ever drank was in America.[35] This is said without reference to the different qualities of the vineyards—­but, by poverty, I mean the want of the vines.

Vineyards abound all over the American continent, within the proper latitudes, except in the portions of it peopled by the colonists who have an English origin.  To this fact, then, it is fair to infer, that we owe the general neglect of this generous plant among ourselves.  The Swiss, German, and French emigrants are already thinking of the vine, while we have been in possession of the country two centuries without making a cask of wine.  If this be not literally true it is so nearly true, as to render it not less a leading fact.  I do not attach exactly the same moral consequences to the want of the vine as is usually attributed to the circumstances by political economists; though I am of opinion that serious physical evils may be traced to this cause.  Men will seek some stimulus or other, if it be attainable, place them in what situations you will, although wine is forbidden by the Koran, the Mahomedan is often intoxicated; and my own eyes have shown me how much drunkenness exists in the vine-growing countries of Europe.  On this subject it may be well to say a word en passant.

More summaries and resources for teaching or studying A Residence in France.

A Residence in France from Project Gutenberg. Public domain.