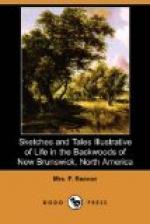 And now, while our hostess of this evening busied herself in compounding these sweet mysteries, the old man related to us the following love passage of his earlier days, which I shall give in my own language, although his original expressions rendered it infinitely more interesting.

On the margin of a bright blue western stream stood a small fort, surrounding the dwellings of some hunters who had penetrated thus far into the vast wilderness to pursue their calling.  The huts they raised were rude and lowly, and yet the walls surrounding them were high and lofty.  Piles of arms filled their block house, and a constant guard was kept.  These precautions were taken to protect them from the Indians, whose ancient hunting grounds they had intruded on, and whose camp was not far distant.  Deadly dealings had passed between them, but the whites, strong in number and in arms, heeded little the settled malice of their foes, and after taking the usual precautions of defence, carried on their hunting, shooting an Indian, or ought else that came across them, while the others, savage and unrelenting, kept on their trail in hope of vengeance.

Strange was it, that in an atmosphere dark as this, the light of love should beam.  Leemah, a beautiful Indian girl, met in the forest a young white hunter.  She loved, and was beloved in return.  The roses of the few summers she had lived glowed warm upon her cheek, and truth flashed in the guileless light of her deep dark eyes—­but Leemah was already a bride, betrothed in childhood to a chieftain of her tribe; he had now summoned her to his dwelling, and her business in the forest was collecting materials for her bridal store of box and basket.  Her sylph-like form of arrowy grace was arrayed in his wedding gifts of costly furs, and glittering bright with bead and shell.  But few were the stores that Leemah gathered for her Indian chief.  The burning noon was passed with her white love in the leafy shade—­there she brought for him summer berries, and gathered for him the water cup flower, with its cooling draught of fragrant dew.  Her time of marriage came, and at midnight it was to be celebrated with torch light and dance.  The other hunters knew the love of Silas for the gem of the wilderness, and readily offered their assistance in his project of gaining her.  To them, carrying off an Indian girl was an affair of light moment, and at dark of night, with their boat and loaded rifles, they proceeded up the stream towards the Indian village.  As they drew near, the wild chaunt of the bridal song was heard, and as all silently they approached the shore, the red torch light gleamed out upon the scene of mystic splendour.  The chieftains of the tribe in stately silence stood around.  The crimson beams lit up the plumes upon their brow, and showed in more awful hues the fearful lines of their painted faces, terrible at the festival