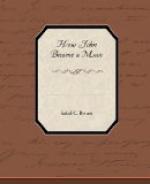 Get How John Became a Man from Amazon.com
View the Study Pack

How John Became a Man eBook

This eBook from the Gutenberg Project consists of approximately 79 pages of information about How John Became a Man.

Out on the prairie in one of the western states where buffaloes and wild horses once had roamed at their pleasure and where cacti and yuccas still thrived and bloomed could be seen a small two-story frame building.  There was nothing strange in this except that the house was different from the average house of the plains; for at this particular time the greater part of the dwellings were made of sod, mud, and brush.

The people, generally speaking, were of that type who think principally of getting all the enjoyment from their every-day lives that it is possible to obtain.  There was, therefore, little thought among them of the hereafter, when men must give an account of themselves before a just and living God.  In fact, the younger generation scarcely knew that there was a God who took note of all their ways.

The building, so different from the ordinary dwellings upon the prairie, was the home of a tiny lad named John.  It was a happy home; for both his parents were living, and the love that bound their hearts together brought peace and happiness to each member of the little household.  But could this happy group have known of the presence of a grim monster just outside the door, who at that very moment was seeking an entrance, their joy would have given place to sorrow.  Death was soon to destroy the light and comfort of that home.  The devoted wife and mother was not strong; and after a severe illness lasting but a few short days, her spirit left the ones she loved and her lifeless body was carried to its last resting place in the cemetery a few miles away.

Little John was, of course, too young to realize the true meaning of the change; but that something dreadful had happened he very well knew, and his large pathetic eyes spoke the grief that he did understand and could not express.  During the three years of his short life he had known the care of a tender, loving mother, whose ambitions were high and noble.  Although not a Christian, she had often expressed her wish that her little brown-eyed boy might grow up to be an honor to his father and mother, and a blessing to his country.  After her death his papa’s eyes were often filled with tears, for he loved and pitied his little boy.

One evening when the lights were dim and the hands of the clock were pointing to the bedtime hour, John felt his father’s arms tenderly encircled about him and heard him softly saying:  “My little John, we are left all alone now, and you must hurry up and become a man as soon as you can; for I need you to help me.  Mama has gone away and left us, and she cannot teach you the things that she had planned that you should know; so we will have to do the best that we can, but you must help me.  First of all, I want you to learn how to pray; for there is a God in heaven, who made you, and of whom your mother expected to tell you.  Before Him we should bow down and pray every night before we go to sleep.”

More summaries and resources for teaching or studying How John Became a Man.

How John Became a Man from Project Gutenberg. Public domain.