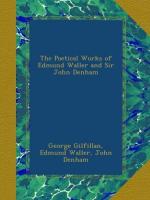 Get Poetical Works of Edmund Waller and Sir John Denham from Amazon.com
View the Study Pack

Edmund Waller
This eBook from the Gutenberg Project consists of approximately 294 pages of information about Poetical Works of Edmund Waller and Sir John Denham.

Such as, of old, wise bards employ’d, to make
Unpolish’d men their wild retreats forsake;
Law-giving heroes, famed for taming brutes,
And raising cities with their charming lutes;
For rudest minds with harmony were caught,
And civil life was by the Muses taught. 50
So wand’ring bees would perish in the air,
Did not a sound, proportion’d to their ear,
Appease their rage, invite them to the hive,
Unite their force, and teach them how to thrive,
To rob the flowers, and to forbear the spoil,
Preserved in winter by their summer’s toil;
They give us food, which may with nectar vie,
And wax, that does the absent sun supply.

ON THE DUKE OF MONMOUTH’S EXPEDITION INTO SCOTLAND IN THE SUMMER SOLSTICE.

Swift as Jove’s messenger (the winged god),
With sword as potent as his charmed rod,
He flew to execute the King’s command,
And in a moment reach’d that northern land,
Where day contending with approaching night,
Assists the hero with continued light.

On foes surprised, and by no night conceal’d,
He might have rush’d; but noble pity held
His hand a while, and to their choice gave space,
Which they would prove, his valour or his grace. 10
This not well heard, his cannon louder spoke,
And then, like lightning, through that cloud he broke.
His fame, his conduct, and that martial look,
The guilty Scots with such a terror strook,
That to his courage they resign the field,
Who to his bounty had refused to yield.
Glad that so little loyal blood it cost,
He grieves so many Britons should be lost;
Taking more pains, when he beheld them yield,
To save the flyers, than to win the field; 20
And at the Court his int’rest does employ,
That none, who ’scaped his fatal sword, should die.

And now, these rash bold men their error find,
Not trusting one beyond his promise kind;
One! whose great mind, so bountiful and brave,
Had learn’d the art to conquer and to save.

In vulgar breasts no royal virtues dwell;
Such deeds as these his high extraction tell,
And give a secret joy to him that reigns,
To see his blood triumph in Monmouth’s veins; 30
To see a leader whom he got and chose,
Firm to his friends, and fatal to his foes.

But seeing envy, like the sun, does beat,
With scorching rays, on all that’s high and great,
This, ill-requited Monmouth! is the bough
The Muses send to shade thy conqu’ring brow.
Lampoons, like squibs, may make a present blaze;
But time and thunder pay respect to bays.
Achilles’ arms dazzle our present view,
Kept by the Muse as radiant and as new 40
As from the forge of Vulcan first they came;
Thousands of years are past, and they the same;
Such care she takes to pay desert with fame!
Than which no monarch, for his crown’s defence,
Knows how to give a nobler recompence.