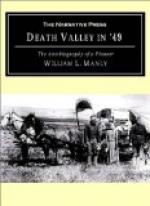 Get Death Valley in '49 from Amazon.com
View the Study Pack

This eBook from the Gutenberg Project consists of approximately 581 pages of information about Death Valley in '49.

Chapter XV.  The Author again takes up the History.—­Working in a Boarding House, but makes Arrangements to go North.—­Mission San Bueno Ventura.—­First Sight of the Pacific Ocean.—­Santa Barbara in 1850.—­Paradise and Desolation.—­San Miguel, Santa Ynez and San Luis Obispo.—­California Carriages and how they were used.—­Arrives in San Jose and Camps in the edge of Town.—­Description of the place.—­Meets John Rogers, Bennett, Moody and Skinner.—­On the road to the Mines.—­They find some of the Yellow Stuff and go Prospecting for more—­Experience with Piojos—­Life and Times in the Mines—­Sights and Scenes along the Road, at Sea, on the Isthmus, Cuba, New Orleans, and up the Mississippi—­A few Months Amid Old Scenes, then away to the Golden State again.

Chapter XVI St. Louis to New Orleans, New Orleans to San Francisco—­Off to the Mines Again—­Life in the Mines and Incidents of Mining Times and Men—­Vigilance Committee—­Death of Mrs. Bennett.

CHAPTER XVII Mines and Mining—­Adventures and Incidents of the Early Days—­The Pioneers, their Character and Influence—–­ Conclusion.

THE AUTOBIOGRAPHY OF A PIONEER

St. Albans, Vermont is near the eastern shore of Lake Champlain, and only a short distance south of “Five-and-forty north degrees” which separates the United States from Canada, and some sixty or seventy miles from the great St. Lawrence River and the city of Montreal.  Near here it was, on April 6th, 1820, I was born, so the record says, and from this point with wondering eyes of childhood I looked across the waters of the narrow lake to the slopes of the Adirondack mountains in New York, green as the hills of my own Green Mountain State.

The parents of my father were English people and lived near Hartford, Connecticut, where he was born.  While still a little boy he came with his parents to Vermont.  My mother’s maiden name was Phoebe Calkins, born near St. Albans of Welch parents, and, being left an orphan while yet in very tender years, she was given away to be reared by people who provided food and clothes, but permitted her to grow up to womanhood without knowing how to read or write.  After her marriage she learned to do both, and acquired the rudiments of an education.

Grandfather and his boys, four in all, fairly carved a farm out of the big forest that covered the cold rocky hills.  Giant work it was for them in such heavy timber—­pine, hemlock, maple, beech and birch—­the clearing of a single acre being a man’s work for a year.  The place where the maples were thickest was reserved for a sugar grove, and from it was made all of the sweet material they needed, and some besides.  Economy of the very strictest kind had to be used in every

More summaries and resources for teaching or studying Death Valley in '49.