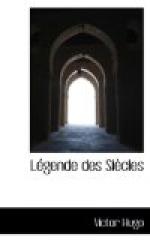 1. 144.  This is another deviation from tradition, as we have it in the Carolingian cycle.  Roland never married Aude.  He was still betrothed to her when he fell at Roncesvalles.

The poem on part of which this is based is an anonymous Chanson written in the thirteenth century and belonging to the cycle known as the cycle of Guillaume.

The story is as follows.  Charlemagne is returning from Spain, after the defeat at Roncesvalles, his army discouraged, his knights exhausted, and wishing only to be at home and in comfort.  Suddenly he catches sight of a city, surrounded by a crenelated wall, splendid within, with a palace the roofs of which shine in the sun, its feet bathed in the sea, which is covered by the ships of its commerce.  Charlemagne wishes to attack it, but the duke of Bavaria advises him to let it alone; it is garrisoned by thousands of pagans and his men are exhausted.  The Emperor addresses several of his barons in turn, offering to each the city if he will take it.  One and all refuse:  Charlemagne upbraids them for their cowardice, bids them go home, and declares he will take the town by himself.  Then Hernaut de Beaulande brings forward his son Aimeri, who volunteers to undertake the task.  With the aid of one hundred barons he captures the city and is made Count of Narbonne.  Hugo has selected the first and the best part of the Chanson for modernization.  Leon Gautier (Les Epopees francaises) says:  ’Rien n’egale en majeste le debut de ce poeme, dont le denoument est presque trivial...  Rien de plus ennuyeux que le recit de tant de combats contre les Sarrasins; rien de plus attachant que le tableau de ce grand desespoir de Charlemagne a la vue de Narbonne, dont aucun de ses Barons ne veut entreprendre la conquete.  Il n’y a peut-etre dans aucune poesie aucun episode comparable a ce discours de l’Empereur, lorsqu’il crie a tous ses chevaliers:  “Rales vos en, Bourguignon et Francois...je remenrai ici, a Narbonois.”  C’est ce qu’a bien compris Victor Hugo, qui a si fidelement traduit et surpasse encore les beautes du texte original.’

Hugo’s poem, however, is not based directly on the Chanson, but on two prose adaptations written by Achille Jubinal, and published respectively in the Musee des Familles (1843) and the Journal du Dimanche (1846).  Yet these stories did little more than furnish the framework for the poem, by far the greater part of which is the original work of Hugo.

a la barbe fleurie, white-bearded.  Expression taken from the Chanson.  In mediaeval poetry Charlemagne is always described as an old man.

Roncevaux, which we call by the Spanish name Roncesvalles, is the valley in the Pyrenees where Charlemagne’s rearguard was attacked and cut to pieces by the Moors during his retreat from Spain.

Ganelon, the knight through whose treachery the defeat of Charlemagne at Roncesvalles was brought about.