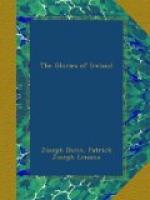 Get The Glories of Ireland from Amazon.com
View the Study Pack

The Glories of Ireland eBook

This eBook from the Gutenberg Project consists of approximately 452 pages of information about The Glories of Ireland.

Northumbria:  Turn now to Northumbria.  Adamnan writes that St. Columcille’s name was honored not only in Gaul, Spain, and Italy, but in Rome itself.  England, however, owes to it a special veneration, because of the widespread apostolic work accomplished within her borders by Columcille’s Irish disciples.  The facts are as follows:  Northumbrian Christianity was well-nigh exterminated through the victory of Penda the pagan over Edwin the Christian, A.D. 633.  St. Paulinus, its local Roman apostle, was driven permanently from his newly founded churches.  Meanwhile Oswald and his brother Edwith sought refuge among the Irish monks of lona, and received baptism at their hands.  Edwith died and Oswald became heir to the throne.  A battle was fought.  The day before he met the pagan army, between the Tyne and the Solway, Oswald beheld St. Columcille in vision saying to him:  “Be strong and of good faith; I will be with thee.”  The result of this vision of the abbot of Iona was that a considerable part of England received the true faith.  Oswald was victorious; he united the kingdoms of Deira and Bernicia, and became overlord of practically all England, with the exception of Kent.  There was evangelization to be done, and St. Oswald turned to Iona.  In response to his appeal, the Irish bishop, St. Aidan, was sent with several companions.  They were established on the island of Lindisfarne, in sight of the royal residence at Bamborough.  These monks labored in union with, and even seemed to exceed in zeal, the Roman missionaries in the south under St. Augustine.  However great the enthusiasm they had displayed for conversions in Iona, they displayed still greater on the desolate isle of Lindisfarne.  In the first instance St. Aidan and his monks evangelized Northumbria.  Want of facility in preaching in the Anglo-Saxon tongue was at first an obstacle, but it was speedily overcome, for king Oswald himself, who knew both Gaelic and English, came forward and acted as interpreter.

When St. Aidan died in 651, Iona sent St. Finan, another Irish bishop, to succeed him.  Finan spread the faith beyond the borders of Northumbria and succeeded so well that he himself baptized Penda, king of the Mid-Angles, and Sigebert, king of the East Saxons.  Diuma and Cellach, Irish monks, assisted by three Anglo-Saxon disciples of St. Aidan, consolidated the mission to the Mercians.

Anglia:  While Christianity was thus being restored in Northumbria, other Irish apostles were teaching it in East Anglia.  St. Fursey, accompanied by his brother St. Foillan and St. Ultan and the priests Gobham and Dicuil, landed in England in 633, and began to labor in the eastern portions of Anglia.  In his monastery at Burghcastle, in Suffolk, the convert king Sigebert made his monastic profession, and in the same house many heavenly visions were vouchsafed to its founder.

The South Saxons had in Dicuil an apostle who founded the monastery of Bosham in Sussex, whence originated the episcopal see of Chichester.  Another Irish monk named Maeldubh settled among the West Saxons and became the founder of Malmesbury Abbey and the instructor of the well-known St. Aldhelm.

More summaries and resources for teaching or studying The Glories of Ireland.

The Glories of Ireland from Project Gutenberg. Public domain.