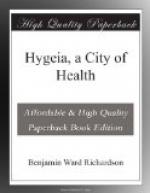 Get Hygeia, a City of Health from Amazon.com
View the Study Pack

Hygeia, a City of Health eBook

Benjamin Ward Richardson
This eBook from the Gutenberg Project consists of approximately 33 pages of information about Hygeia, a City of Health.

Title:  Hygeia, a City of Health

*** Start of this project gutenberg EBOOK Hygeia, A city of health ***

This file was produced from images generously made available by the Bibliotheque nationale de France (BnF/Gallica) at http://gallica.bnf.fr

Hygeia
A city of health

I wrote this Address with the intention of dedicating it to you, as a simple but hearty acknowledgment by a sanitary student, himself well ripened in the work, of your pre-eminent position as the living leader of the sanitary reformation of this century.

The favour the Address has received indicates notably two facts:  the advance of public opinion on the subject of public health, and the remarkable value and influence of your services as the sanitary statesman by whom that opinion has been so wisely formed and directed.

In this sense of my respect for you, and of my gratitude, pray accept this trifling recognition, and believe me to be,

The immediate success of this Address caused me to lay it aside for some months, to see if the favour with which it was received would remain.  I am satisfied to find that the good fortune which originally attended the effort holds on, and that in publishing it now in a separate form I am acting in obedience to a generally expressed desire.

Since the delivery of the Address before the Health Department of the Social Science Congress, over which I had the honour to preside, at Brighton, in October last, every day has brought some new suggestion bearing on the subjects discussed, and the temptation has been great to add new matter, or even to recast the essay and bring it out as a more compendious work.  On reflection I prefer to let it take its place in literature, in the first instance, in its original and simple dress.

HYGEIA, A CITY OF HEALTH

More summaries and resources for teaching or studying Hygeia, a City of Health.

Hygeia, a City of Health from Project Gutenberg. Public domain.