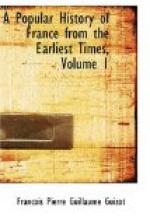 Get A Popular History of France from the Earliest Times, Volume 1 from Amazon.com
View the Study Pack

A Popular History of France from the Earliest Times, Volume 1 eBook

François Guizot
This eBook from the Gutenberg Project consists of approximately 499 pages of information about A Popular History of France from the Earliest Times, Volume 1.

There is a certain amount of sound sense, of intelligent activity and practical efficiency, which even the least civilized and least exacting communities absolutely must look for in their governing body.  When this necessary share of ability and influence of a political kind are decidedly wanting in the men who have the titles and the official posts of power, communities seek elsewhere the qualities (and their consequences) which they cannot do without.  The sluggard Merovingians drove the Franks, Neustrians, and Austrasians to this imperative necessity.  The last of the kings sprung from Clovis acquitted themselves too ill or not at all of their task; and the mayors of the palace were naturally summoned to supply their deficiencies, and to give the populations assurance of more intelligence and energy in the exercise of power.  The origin and primitive character of these supplements of royalty were different according to circumstances; at one time, conformably with their title, the mayors of the palace really came into existence in the palace of the Frankish kings, amongst the “leudes,” charged, under the style of antrustions (lieges in the confidence of the king:  in truste regia), with the internal management of the royal affairs and household, or amongst the superior chiefs of the army; at another, on the contrary, it was to resist the violence and usurpation of the kings that the “leudes,” landholders or warriors, themselves chose a chief able to defend their interests and their rights against the royal tyranny or incapacity.  Thus we meet, at this time, with mayors of the palace of very different political origin and intention, some appointed by the kings to support royalty against the “leudes,” others chosen by the “leudes” against the kings.  It was especially between the Neustrian and Austrasian mayors of the palace that this difference became striking.  Gallo-Roman feeling was more prevalent in Neustria, Germanic in Austrasia.  The majority of the Neustrian mayors supported the interests of royalty, the Austrasian those of the aristocracy of landholders and warriors.  The last years of the Merovingian line were full of their struggles; but a cause far more general and more powerful than these differences and conflicts in the very heart of the Frankish dominions determined the definitive fall of that line and the accession of another dynasty.  When in 687 the battle fought at Testry, on the banks of the Somme, left Pepin of Heristal, duke and mayor of the palace of Austrasia, victorious over Bertaire, mayor of the palace of Neustria, it was a question of something very different from mere rivalry between the two Frankish dominions and their chiefs.

More summaries and resources for teaching or studying A Popular History of France from the Earliest Times, Volume 1.

A Popular History of France from the Earliest Times, Volume 1 from Project Gutenberg. Public domain.