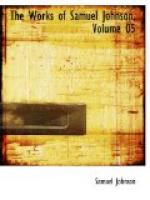 Get The Works of Samuel Johnson, Volume 05 from Amazon.com
View the Study Pack

Samuel Johnson
This eBook from the Gutenberg Project consists of approximately 570 pages of information about The Works of Samuel Johnson, Volume 05.

Percy is a rugged soldier, cholerick and quarrelsome, and has only the soldier’s virtues, generosity and courage.  But Falstaff, unimitated, unimitable Falstaff, how shall I describe thee! thou compound of sense and vice; of sense which may be admired, but not esteemed; of vice which may be despised, but hardly detested.  Falstaff is a character loaded with faults, and with those faults which naturally produce contempt.  He is a thief and a glutton, a coward and a boaster, always ready to cheat the weak, and prey upon the poor; to terrify the timorous, and insult the defenceless.  At once obsequious and malignant, he satirizes in their absence those whom he lives by flattering.  He is familiar with the prince only as an agent of vice, but of this familiarity he is so proud, as not only to be supercilious and haughty with common men, but to think his interest of importance to the duke of Lancaster.  Yet the man thus corrupt, thus despicable, makes himself necessary to the prince that despises him, by the most pleasing of all qualities, perpetual gaiety, by an unfailing power of exciting laughter, which is the more freely indulged, as his wit is not of the splendid or ambitious kind, but consists in easy scapes and sallies of levity, which make sport, but raise no envy.  It must be observed, that he is stained with no enormous or sanguinary crimes, so that his licentiousness is not so offensive but that it may be borne for his mirth.

The moral to be drawn from this representation is, that no man is more dangerous than he that, with a will to corrupt, hath the power to please; and that neither wit nor honesty ought to think themselves safe with such a companion, when they see Henry seduced by Falstaff.

This play has many scenes of high dignity, and many of easy merriment.  The character of the king is well supported, except in his courtship, where he has neither the vivacity of Hal, nor the grandeur of Henry.  The humour of Pistol is very happily continued; his character has, perhaps, been the model of all the bullies that have yet appeared on the English stage.

The lines given to the chorus have many admirers; but the truth is, that in them a little may be praised, and much must be forgiven:  nor can it be easily discovered why the intelligence given by the chorus is more necessary in this play than in many others where it is omitted.  The great defect of this play is the emptiness and narrowness of the last act, which a very little diligence might have easily avoided.

Of this play there is no copy earlier than that of the folio in 1623, though the two succeeding parts are extant in two editions in quarto.  That the second and third parts were published without the first, may be admitted, as no weak proof that the copies were surreptitiously obtained, and that the printers of that time gave the publick those plays, not such as the author designed, but such as they could get them.  That this play was written before the two others is indubitably collected from the series of events; that it was written and played before Henry V. is apparent, because in the epilogue there is mention made of this play, and not of the other parts:

More summaries and resources for teaching or studying The Works of Samuel Johnson, Volume 05.