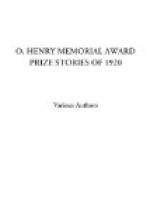 From The Pictorial Review

This is not an easy story; not a road for tender or for casual feet.  Better the meadows.  Let me warn you, it is as hard as that old man’s soul and as sunless as his eyes.  It has its inception in catastrophe, and its end in an act of almost incredible violence; between them it tells barely how one long blind can become also deaf and dumb.

He lived in one of those old Puritan sea towns where the strain has come down austere and moribund, so that his act would not be quite unbelievable.  Except that the town is no longer Puritan and Yankee.  It has been betrayed; it has become an outpost of the Portuguese islands.

This man, this blind cobbler himself, was a Portuguese from St. Michael, in the Western Islands, and his name was Boaz Negro.

He was happy.  An unquenchable exuberance lived in him.  When he arose in the morning he made vast, as it were uncontrollable, gestures with his stout arms.  He came into his shop singing.  His voice, strong and deep as the chest from which it emanated, rolled out through the doorway and along the street, and the fishermen, done with their morning work and lounging and smoking along the wharfs, said, “Boaz is to work already.”  Then they came up to sit in the shop.

In that town a cobbler’s shop is a club.  One sees the interior always dimly thronged.  They sit on the benches watching the artizan at his work for hours, and they talk about everything in the world.  A cobbler is known by the company he keeps.

Boaz Negro kept young company.  He would have nothing to do with the old.  On his own head the gray hairs set thickly.

He had a grown son.  But the benches in his shop were for the lusty and valiant young, men who could spend the night drinking, and then at three o’clock in the morning turn out in the rain and dark to pull at the weirs, sing songs, buffet one another among the slippery fish in the boat’s bottom, and make loud jokes about the fundamental things, love and birth and death.  Harkening to their boasts and strong prophecies his breast heaved and his heart beat faster.  He was a large, full-blooded fellow, fashioned for exploits; the flame in his darkness burned higher even to hear of them.

It is scarcely conceivable how Boaz Negro could have come through this much of his life still possessed of that unquenchable and priceless exuberance; how he would sing in the dawn; how, simply listening to the recital of deeds in gale or brawl, he could easily forget himself a blind man, tied to a shop and a last; easily make of himself a lusty young fellow breasting the sunlit and adventurous tide of life.