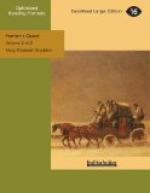 Gilbert Fenton took up his abode at the dilapidated old inn at Crosber, thinking that he might be freer there than at the Grange; a dismal place of sojourn under the brightest circumstances, but unspeakably dreary for him who had only the saddest thoughts for his companions.  He wanted to be on the spot, to be close at hand to hear tidings of the missing girl, and he wanted also to be here in the event of John Holbrook’s return—­to come face to face with this man, if possible, and to solve that question which had sorely perplexed him of late—­the mystery that hung about the man who had wronged him.

He consulted Ellen Carley as to the probability of Mr. Holbrook’s return.  The girl seemed to think it very unlikely that Marian’s husband would ever again appear at the Grange.  His last departure had appeared like a final one.  He had paid every sixpence he owed in the neighbourhood, and had been liberal in his donations to the servants and hangers-on of the place.  Marian’s belongings he had left to Ellen Carley’s care, telling her to pack them, and keep them in readiness for being forwarded to any address he might send.  But his own books and papers he had carefully removed.

“Had he many books here?” Gilbert asked.

“Not many,” the girl answered; “but he was a very studious gentleman.  He spent almost all his time shut up in his own room reading and writing.”

In this respect the habits of the unknown corresponded exactly with those of John Saltram.  Gilbert Fenton’s heart beat a little quicker at the thought that he was coming nearer by a step to the solution of that question which was always uppermost in his mind now.

“Do you know if he wrote books—­if he was what is called a literary man—­living by his pen?” he asked presently.

“I don’t know; I never heard his wife say so.  But Mrs. Holbrook was always reserved about him and his history.  I think he had forbidden her to talk about his affairs.  I know I used to fancy it was a dull life for her, poor soul, sitting in his room hour after hour, working while he wrote.  He used not to allow her to be with him at all at first, but little by little she persuaded him to let her sit with him, promising not to disturb him by so much as a word; and she never did.  She seemed quite happy when she was with him, contented, and proud to think that her presence was no hindrance to him.”

“And you think he loved her, don’t you?”

“At first, yes; but I think a kind of weariness came over him afterwards, and that she saw it, and almost broke her heart about it.  She was so simple and innocent, poor darling, it wasn’t easy for her to hide anything she felt.”

Gilbert asked the bailiff’s daughter to describe Mr. Holbrook to him, as she had done more than once before.  But this time he questioned her closely, and contrived that her description of this man’s outward semblance should be especially minute and careful.