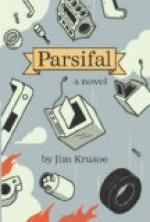 But King Amfortas bowed his anguished head,
And held his wound all broken out afresh.
Slowly they carried him from out the hall
And slowly marched the knights with solemn joy,
Bearing the Grail within the covered shrine,
While bells were chiming in the lofty dome.
And then the lad—­for he was Parsifal—­
Tight clutched his heart in sorrowful distress
As King Amfortas groaned in bitter woe.
He stood in utter anguish overcome,
Breathing impulsive with deep sympathy,
But spake no single word, nor gave one sign
That he had understood the solemn feast,
Or seen the glory of the Holy Grail.
And when the last knight left the festal hall
And all the doors were closed, then Gurnemanz
Came to the lad and shook him from the spell
And asked:  “What sawest thou, what does it mean?”
And when he answered not, but shook his head,
Clutching his heart as if in agony,
The patient Gurnemanz had patience then no more,
But thrust him out and quick made fast the door,
With the scant words:  “Begone, thou guileless lad!
Guileless thou mayst be; utter fool thou art!”
So Parsifal went forth into the world,
Naught knowing of the meaning of it all
Except the new-stirred pity in his heart.
And as the angry Gurnemanz returned,
And made his way along the pillared hall,
He stopped, amazed, and listened, for he heard
From far above a gentle voice that sang:
"By pity ’lightened,
My guileless One!"
And from the loftiest dome another voice:
“Blessed believing!”

THE TEMPTING OF PARSIFAL

Klingsor the dread magician plied his arts
And worked in shame his dastardly black deeds,
Within the inner keep of a great tower,—­
The watch-tower of the grim and frowning castle.
Here in a dark and dismal rocky room,
Where Heaven’s light could scarcely find a way,
And where around him lay his books and tools
Of hateful magic, littering the floor,
Steadfast he looked upon a metal mirror
That told the fates to him,—­then muttered low:
“The time has come!  Lo, how my tower entices
The guileless lad, who cometh like a child
With happy heart, and laughter on his lips.
Come, I must work my work by her who sleeps
In heavy slumber underneath my spell;
For in the past she did my deadliest deeds.”

And in the gloom he kindled incense rare,
That filled the keep with blue unearthly smoke;
And sitting at the mirror once again,
He called with mystic gestures to the depths
That yawned beneath an opening in the floor:
“Uprise!  Come forth!  Draw near me at my will!
Thy master calls thee, nameless wanderer,
Rose-bloom of Hell, and ancient devil-queen!
A thousand times the earth has known thy face
In many forms of woman’s wiles and sins,—­
Herodias wert thou in ancient time,
And once again Gundryggia wert called
In old Norse days; but thou art Kundry now,
Symbol of woman’s wile and cruel craft.
Come hither, Kundry, for thy master calls!”