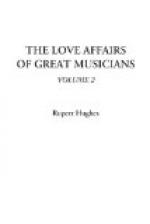 Get The Love Affairs of Great Musicians, Volume 2 from Amazon.com
View the Study Pack

Rupert Hughes
This eBook from the Gutenberg Project consists of approximately 217 pages of information about The Love Affairs of Great Musicians, Volume 2.

“Liszt, or the Art of Running after Women.”—­NIETSCHE.

Liszt’s life was so lengthy and so industriously amorous, that it is possible only to float along over the peaks, to touch only the high points.  Why, his letters to the last of his loves alone make up four volumes!  And yet, for a life so proverbially given over to flirtations as his, the beginnings were strangely unprophetic.  He had reached the mature age of six before he began to study the piano; compared with Mozart, he was an old man before he gave his first concert—­namely, nine years.  Then the poverty of his parents and the ambition of his father found assistance in a stipend from Hungarian noblemen, and he was sent to Vienna to study.  When he was eleven years old, after one of his concerts, Beethoven kissed him.  He survived.  Then on to Paris and duchesses and princesses galore.  Here he became a proverb of popularity as “Le petit Litz”—­the French inevitably gave some twist to a foreign name, then as to-day, when two of their favourite painters are “Wisthler” and “Seargent.”

Liszt’s childhood was therefore largely fed upon the embraces and kisses of rapturous women, even as was the young Mozart’s, the difference being that it became a habit in Liszt’s case.  Even then he used to throw money among the gamins, as later he scattered it in how many directions, with what liberality, and with what princeliness, and from what a slender purse!

The father and mother had gone to Paris with him; but soon the mother went back to Austria—­she was a German, the father alone being Hungarian.  With his father the lad remained, and found him a severe and domineering master.  But in 1827 he died, leaving his sixteen-year-old son alone in Paris.  That stalwart self-reliance and sense of honour, which gave nobility to so much of Liszt’s character, now showed itself; he sold his grand piano to pay the debts his father had left him, and sent for his mother to come to Paris, where he supported her by giving piano lessons.  Then, as later, he found plenty of pupils, the difference being that then, as not later, he took pay for his lessons, though not even then from all.

Here he was at sixteen, tall and handsome, and with a face of winsomeness that never lost its spell over womankind.  Sixteen-year-older that he was, he was a man of great fame, and the grind of acquiring technic was all passed.  Moscheles had already said of him in print:  “Franz Liszt’s playing surpasses everything yet heard, in power and the vanquishing of difficulties.”  Here he was, then, young, beautiful, famous, a dazzling musician, and Hungarian.  What do you expect?

It makes small difference what you expect, for the reality was that his heart was eager for the seclusion of a monastery; his soul pined for religious excitement only!  At fourteen he had begun to rebel against his nickname, “Le petit Litz.”  It was with the utmost difficulty that his father had been able to keep him from making religion his career, and giving up his already glittering fame.  Never in his life did he cease to thrill with an almost hysterical passion for churchly affairs and ceremonies.

More summaries and resources for teaching or studying The Love Affairs of Great Musicians, Volume 2.