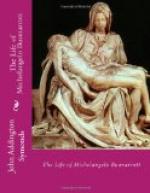 Get The Life of Michelangelo Buonarroti from Amazon.com
View the Study Pack

The Life of Michelangelo Buonarroti eBook

John Addington Symonds
This eBook from the Gutenberg Project consists of approximately 667 pages of information about The Life of Michelangelo Buonarroti.

for austerity, to suppose that this admirable matron, who, after the death of her husband, gave herself up to God, and abjured the commerce of the world, should, later in life, have carried on an intrigue, as the saying is, upon the sly, particularly when a third person is imposed on our credulity, acting the part of go-between and cloak in the transaction, as certain biographers of the great artist, and certain commentators of his poetry, are pleased to assert, with how much common-sense and what seriousness I will not ask.”

The history of Luigi del Riccio’s affection for a lad of Florence called Cecchino dei Bracci, since this is interwoven with Michelangelo’s own biography and the criticism of his poems, may be adduced in support of the argument I am developing.  Cecchino was a youth of singular promise and personal charm.  His relative, the Florentine merchant, Luigi del Riccio, one of Buonarroti’s most intimate friends and advisers, became devotedly attached to the boy.  Michelangelo, after his return to Rome in 1534, shared this friend Luigi’s admiration for Cecchino; and the close intimacy into which the two elder men were drawn, at a somewhat later period of Buonarroti’s life, seems to have been cemented by their common interest in poetry and their common feeling for a charming personality.  We have a letter of uncertain date, in which Michelangelo tells Del Riccio that he has sent him a madrigal, begging him, if he thinks fit, to commit the verses “to the fire—­that is, to what consumes me.”  Then he asks him to resolve a certain problem which has occurred to his mind during the night, “for while I was saluting our idol in a dream, it seemed to me that he laughed, and in the same instant threatened me; and not knowing which of these two moods I have to abide by, I beg you to find out from him; and on Sunday, when we meet again, you will inform me.”  Cecchino, who is probably alluded to in this letter, died at Rome on the 8th of January 1542, and was buried in the Church of Araceli.  Luigi felt the blow acutely.  Upon the 12th of January he wrote to his friend Donate Giannotti, then at Vicenza, in the following words:—­

“Alas, my friend Donato!  Our Cecchino is dead.  All Rome weeps.  Michelangelo is making for me the design of a decent sepulture in marble; and I pray you to write me the epitaph, and to send it to me with a consolatory letter, if time permits, for my grief has distraught me.  Patience!  I live with a thousand and a thousand deaths each hour.  O God!  How has Fortune changed her aspect!” Giannotti replied, enclosing three fine sonnets, the second of which, beginning—­

seems to have taken Michelangelo’s fancy.  Many good pens in Italy poured forth laments on this occasion.  We have verses written by Giovanni Aldobrandini, Carlo Gondi, Fra Paolo del Rosso, and Anton Francesco Grazzini, called Il Lasca.  Not the least touching is Luigi’s own threnody, which starts upon this note:—­

More summaries and resources for teaching or studying The Life of Michelangelo Buonarroti.

The Life of Michelangelo Buonarroti from Project Gutenberg. Public domain.