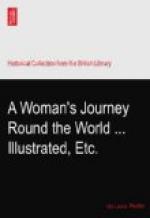 Get A Woman's Journey Round the World from Amazon.com
View the Study Pack

A Woman's Journey Round the World eBook

Ida Laura Pfeiffer
This eBook from the Gutenberg Project consists of approximately 642 pages of information about A Woman's Journey Round the World.

The space, too, is so confined, that you can hardly turn yourself round in the sleeping cabins, while it is quite impossible to stand upright in the berths.  Besides this, the motion of a sailing vessel is much stronger than that of a steamer; on the latter, however, many affirm that the eternal vibration, and the disagreeable odour of the oil and coals, are totally insupportable.  For my own part, I never found this to be the case; it certainly is unpleasant, but much easier to bear than the many inconveniences always existing on board a sailing vessel.  The passenger is there a complete slave to every whim or caprice of the captain, who is an absolute sovereign and holds uncontrolled sway over everything.  Even the food depends upon his generosity, and although it is generally not absolutely bad, in the best instances, it is not equal to that on board a steamer.

The following form the ordinary diet:  tea and coffee without milk, bacon and junk, soup made with pease or cabbage, potatoes, hard dumplings, salted cod, and ship-biscuit.  On rare occasions, ham, eggs, fish, pancakes, or even skinny fowls, are served out.  It is very seldom, in small ships, that bread can be procured.

To render the living more palatable, especially on a long voyage, passengers would do well to take with them a few additions to the ship’s fare.  The most suitable are:  portable soup and captain’s biscuit—­both of which should be kept in tin canisters to preserve them from mouldiness and insects—­a good quantity of eggs, which, when the vessel is bound for a southern climate, should first be dipped in strong lime-water or packed in coal-dust; rice, potatoes, sugar, butter, and all the ingredients for making sangaree and potato-salad, the former being very strengthening and the latter very cooling.  I would strongly recommend those who have children with them to take a goat as well.

As regards wine, passengers should take especial care to ask the captain whether this is included in the passage-money, otherwise it will have to be purchased from him at a very high rate.

There are also other objects which must not be forgotten, and above all a mattress, bolster, and counterpane, as the berths are generally unfurnished.  These can be purchased very cheaply in any seaport town.

Besides this, it is likewise advisable to take a stock of coloured linen.  The office of washerwoman is filled by a sailor, so that it may easily be imagined that the linen does not return from the wash in the best possible condition.

When the sailors are employed in shifting the sails, great care must be taken to avoid injury by the falling of any of the ropes.  But all these inconveniences are comparatively trifling; the greatest amount of annoyance begins towards the end of the voyage.  The captain’s mistress is his ship.  At sea he allows her to wear an easy neglige, but in port she must appear in full dress.  Not a sign of the long voyage, of the storms, of the glowing heat she has suffered, must be visible.  Then begins an incessant hammering, planing, and sawing; every flaw, every crack or injury is made good, and, to wind up, the whole vessel is painted afresh.  The worst of all, however, is the hammering when the cracks in the deck are being repaired and filled up with pitch.  This is almost unbearable.

More summaries and resources for teaching or studying A Woman's Journey Round the World.

A Woman's Journey Round the World from Project Gutenberg. Public domain.