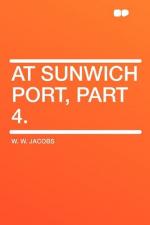 The two ladies received Mr. Hardy’s information with something akin to consternation, the idea of the autocrat of Equator Lodge as a stowaway on board the ship of his ancient enemy proving too serious for ordinary comment.  Mrs. Kingdom’s usual expressions of surprise, “Well, I never did!” and “Good gracious alive!” died on her lips, and she sat gazing helpless and round-eyed at her niece.

“I wonder what he said,” she gasped, at last.

Miss Nugent, who was trying to imagine her father in his new role aboard the Conqueror, paid no heed.  It was not a pleasant idea, and her eyes flashed with temper as she thought of it.  Sooner or later the whole affair would be public property.

“I had an idea all along that he wasn’t in London,” murmured Mrs. Kingdom.  “Fancy that Nathan Smith standing in Sam’s room telling us falsehoods like that!  He never even blushed.”

“But you said that you kept picturing father walking about the streets of London, wrestling with his pride and trying to make up his mind to come home again,” said her niece, maliciously.

Mrs. Kingdom fidgeted, but before she could think of a satisfactory reply Bella came to the door and asked to speak to her for a moment.  Profiting by her absence, Mr. Hardy leaned towards Miss Nugent, and in a low voice expressed his sorrow at the mishap to her father and his firm conviction that everything that could be thought of for that unfortunate mariner’s comfort would be done.  “Our fathers will probably come back good friends,” he concluded.  “There is nothing would give me more pleasure than that, and I think that we had better begin and set them a good example.”

“It is no good setting an example to people who are hundreds of miles away,” said the matter-of-fact Miss Nugent.  “Besides, if they have made friends, they don’t want an example set them.”

“But in that case they have set us an example which we ought to follow,” urged Hardy.

Miss Nugent raised her eyes to his.  “Why do you wish to be on friendly terms?” she asked, with disconcerting composure.

[Illustration:  “‘Why do you wish to be on friendly terms?’ she asked.”]

“I should like to know your father,” returned Hardy, with perfect gravity; “and Mrs. Kingdom—­and you.”

He eyed her steadily as he spoke, and Miss Nugent, despite her utmost efforts, realized with some indignation that a faint tinge of colour was creeping into her cheeks.  She remembered his covert challenge at their last interview at Mr. Wilks’s, and the necessity of reading this persistent young man a stern lesson came to her with all the force of a public duty.

“Why?” she inquired, softly, as she lowered her eyes and assumed a pensive expression.

“I admire him, for one thing, as a fine seaman,” said Hardy.