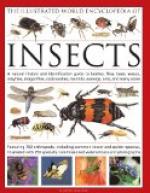 Get The History of Insects from Amazon.com
View the Study Pack

The History of Insects eBook

This eBook from the Gutenberg Project consists of approximately 21 pages of information about The History of Insects.

“I would not enter on my list of friends
(Though grac’d with polish’d manners, and fine sense,
Yet wanting sensibility) the man
Who needlessly sets foot upon a worm.”

The elephant-beetle is the largest of this kind hitherto known, and is found in South America, particularly in Guiana, about the rivers Surinam and Oroonoko.  It is of a black colour, and the whole body is covered with a shell, full as thick and as strong as that of a small crab.  There is one preserved in the museum that measures more than six inches.

Grasshoppers are too common to need description, as they abound almost wherever there is green grass.  One summer only is their period of life; they are hatched in the spring, and die in the fall; previous to which, they deposite their eggs in the earth, which the genial warmth of the next season brings to life.  They are food for many of the feathered race.

There are two classes of crickets:  viz. the field cricket, and the house cricket; the latter inhabits warm places, the holes of the hearth, &c. from whence we hear its notes, which are agreeable:  it is said, that they are purchased by some, and kept in a kind of cage, for the sake of their music.  Field crickets inhabit the meadows, and subsist on roots, &c. as does another species, called the mole cricket.

There are different kinds of the locust; those we are acquainted with, in this country, are represented in the above cut.  In some seasons, they are scarcely heard at all; in others, they are more numerous.  About the middle or latter part of summer, we hear them among the leaves of the trees:  their notes, which are continued about the space of one minute, are loud at the beginning, and grow lower and lower, till they cease; when they immediately fly to another tree, begin again, and end in the same way, and so on.

In the eastern countries, a kind or kinds of locust, at different periods, have been very numerous, and have done abundance of damage.  In the year 1650, a cloud of locusts entered Russia, in three different places; and from thence spread over Poland and Lithuania; the air was darkened, and the earth covered, in some places, to the depth of four feet; the trees bent with heir weight, and the damage sustained exceeded computation.  Locusts were among the plagues of Egypt:  sec Exodus, x. 15.

This very troublesome little animal multiplies very fast among old rags, dirt, straw, and litter, where hogs, cats, or dogs sleep; and in the hair and bristles of those creatures:  therefore, as a means of avoiding such unwelcome neighbours, in the springs the cleanly farmer scrapes up the rubbish about his woodpile, and around his house and barn, and removes it into his field, where it also repays him by manuring his lands.  They abound in warm countries, particularly in the southern parts of France and Italy.

More summaries and resources for teaching or studying The History of Insects.

The History of Insects from Project Gutenberg. Public domain.