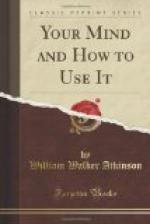 Get How to Use Your Mind from Amazon.com
View the Study Pack

How to Use Your Mind eBook

This eBook from the Gutenberg Project consists of approximately 133 pages of information about How to Use Your Mind.

Exercise I. Cite examples from your own experience showing the effects of the following faults in making impressions. a.  First impression not clear. b.  Insufficient number of repetitions. c.  Use of rote method instead of method of logical association. d.  Impressions not distributed. e.  Improper use of “part” method.

Exercise 2.  After experimentation, state what is your most effective sense avenue for the impression of foreign words, facts in history, the pronunciation of English words.

Exercise 3.  Make a preliminary draft of your next theme; lay it aside for a day or two; then write another on the same subject; combine the two, using the best parts of each; lay this aside for a day or two; then read it aloud, making such changes as are prompted by the auditory presentation.  Can you find elements of worth in this method, which will warrant you in adopting it, at least, in part?

Our discussion up to this point has centred around the phase of memory called impression.  We have described some of the conditions favorable to impression and have seen that certain and accurate memory depends upon adherence to them.  The next phase of memory—­Retention—­cannot be described in psychological terms.  We know we retain facts after they are once impressed, but as to their status in the mind we can say nothing.  If you were asked when the Declaration of Independence was signed, you would reply instantly.  When asked, however, where that fact was five minutes ago, you could not answer.  Somewhere in the recesses of the mind, perhaps, but as to immediate awareness of it, there was none.  We may try to think of retention in terms of nerve cells and say that at the time when the material was first impressed there was some modification made in certain nerve cells which persisted.  This trait of nerve modifiability is one factor which accounts for greater retentive power in some persons than in others.  It must not be concluded, however, that all good memory is due to the inheritance of this trait.  It is due partly to observance of proper conditions of impression, and much can be done to overcome or offset innate difficulty of modification by such observance.

We are now ready to examine the third phase of memory—­Recall.  This is the stage at which material that has been impressed and retained is recalled to serve the purpose for which it was memorized.  Recall is thus the goal of memory, and all the devices so far discussed have it for their object.  Can we facilitate recall by any other means than by faithful and intelligent impressions?  For answer let us examine the state of mind at time of recall.

More summaries and resources for teaching or studying How to Use Your Mind.

How to Use Your Mind from Project Gutenberg. Public domain.