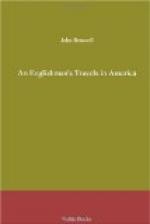 from their slumbers, staring in terror at the frigid masses which we momentarily feared would overwhelm the ship.  The helm being put up, we were soon out of the threatened danger of a collision, which would have consigned us to a grave in the wide wide waters, without the remotest chance of escape.  This consideration was, to all on board, a matter of deep thankfulness to the mighty Author of such stupendous wonders, who had so miraculously preserved our lives.  Had the adventure occurred in the night, our destruction must have been inevitable, as the ship was sailing under heavy canvas, within a single point of the wake of one of the icebergs, which was drifting before a stiff breeze.

Although this encounter proved harmless, we shortly after had another to dread of a fearful nature.  The number of fishing-boats off the coast of Newfoundland, makes the navigation perilous at almost any time to vessels approaching too near the banks, and after night-fall, the vessel going at the rate of ten knots an hour with a smacking breeze, we passed many of these at anchor, or rather, I suppose, riding on the waves; they displayed lights, or serious consequences might have ensued.  Some of the skiffs were so near to us, that as I leaned over the ship’s quarter-rail, dreading, and every moment expecting, that we should run one down, I could distinctly hear the crews hailing us to shorten sail and keep off.  By adopting this course our vessel cleared the danger, and after slightly touching the banks, which caused the vessel to heel, and created a momentary panic on board amongst the passengers, she was steered more out to sea, and by the following morning nothing was to be seen but a boundless waste of waters, extending as far as the eye could reach.

After these temporary alarms, with the exception of baffling winds, which impeded the progress of the ship, and lengthened the duration of our confinement ten days or a fortnight, our voyage was prosperous, little occurring to break the monotony of confinement on ship-board that is experienced in sea-passages in general; the only excitement being a fracas between the captain and cook, owing to complaints made by the middle-cabin and steerage passengers, which nearly ended fatally to the former, who would have been stabbed to a certainty, but for a by-stander wresting the knife from the hand of the enraged subordinate, who had been supplied too liberally with spirits by the passengers; a predominating evil on board all emigrant ships, from the drawback of duty allowed on spirits shipped as stores, and which are retailed on the voyage to the passengers.  The culprit was confined below during the remainder of the voyage, and when we arrived at New York presented a pitiable sight, having been rigidly debarred by the captain’s orders of many of the commonest necessaries, I believe, the whole time.  Here he was released and discharged from the ship, glad enough to escape further punishment, “prosecution” having been, since the occurrence, held in terrorem over him.