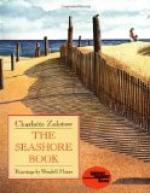 Stones, shells, or rocks do not stop it.  The rays slide up and over them.  If we had feet like those of the Starfish, a journey up the wall of a house, over the roof, and down again, would be nothing to us.  Nature gives all creatures the kind of foot which suits the life they lead.  And it is hard to imagine feet more useful to the Starfish than those wonderful sucker-feet!

Ask any fisherman what he thinks of the “harmless” Starfish, and he will call it a pest and a nuisance.  “It gets into the crab traps,” he says, “and eats all the bait.  And when we are line-fishing it sucks the bait off our hooks, and sometimes swallows hook and all.”  Small wonder that Five-fingers, or Five-fingered Jack, as it is called, has no friend among fisher-folk.

On pulling up a useless Starfish instead of a real fish, the fisherman tears the offender in half and throws the halves back into the waves.  By doing this he harms himself more than the Starfish!  Each half grows into a perfect Starfish with five rays complete.  We can say that each part of this animal has a separate life, for each part can grow when torn away.

If you were asked to open an oyster you would need tools, would you not?  Even with an oyster-knife it is not always an easy job.  The oyster, tight in his shelly fortress, seems safe from the attack of a weak Starfish.  Yet the Starfish opens and eats oysters as part of its everyday life.

Finding a nice fat oyster, it sets to work.  The Starfish folds its rays over its victim, with its mouth against the edge where the shells meet.  The tug-of-war begins.  The Starfish’s tube-feet try to pull the shells apart; the oyster, with all its strength, tries to keep them shut.  It is stronger than its enemy, and yet the steady pull of hundreds of suckers is more than it can stand, and the shells, after a time, begin to gape a little.

Now a strange thing happens.  The mouth of the Starfish opens into a kind of bag which slips between the oyster shells.  The Starfish, as it were, turns itself inside-out!  It then eats the oyster and leaves the clean shell.

Mussels are smaller, so they are eaten in a different way.  The Starfish merely presses the mussel into its mouth, cleans out the shells, and throws them away.  Were we not right to call this wonderful mouth the mouth of an ogre?

Oysters, as you know, are so valuable that we rear them in special “beds.”  Along comes the hungry Starfish, with thousands of its relations, finding the fat oysters very good eating.  They do great damage in our oyster-fisheries, and it is one long battle between them and the keepers of the “beds.”

Supporting the tough skin of Five-fingered Jack is a wonderful skeleton.  It is like a network of fine plates and rods made of lime.  Perhaps you have seen one in a museum.