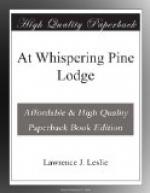 THE HALT ON THE ADIRONDACK CABBY

“Why, Max, he slipped away with his little steel-jointed fishing-rod as soon as he heard you say we’d stop here over night.  And I saw him picking some fat white grubs out of those old rotten stumps we passed at the time we rested, an hour back.  Huh! just like Slippery Steve to get out of the hard work we’ve going to have cutting enough brush for making our shanty shelter tonight; seeing that we didn’t fetch our bully old tent along this trip.  He’s a nice one, I should say.”

“N-n-never you m-m-mind about Steve, Bandy-legs.  He t-t-told me he knew he c-c-could yank a m-m-mess of fine trout out of that c-c-creek, where it looked so s-s-shallow just back there.  He’s m-m-meaning to w-w-wade in, too, I reckon, and when you s-s-smell the fish c-c-cooking you’ll be s-s-sorry you said what you did.”

“Well, let’s get a move on, and start that shanty.  I chose this place partly on account of there being so much brush handy, you see.”

“Sure you did, Max.  It takes you to notice things that miss our eyes.  Here, let me handle the hatchet, because you see I was such a truthful little shaver away back that my folks often regretted they hadn’t named me George Washington.”

The boy answering to the peculiar name of “Bandy-legs” laughed good-naturedly as he began to swing the sharp-edged hatchet, and cut down some of the required brush which, having camped many times before, he knew was suitable for their requirements.

Besides this sturdy young chap with the lower limbs that were a little bowed, and which fact had doubtless suggested such a nickname to his schoolmates, there were two others busily engaged in gathering the material to be used in affording them a rude, but effective shelter during the coming night.

The one whom they called Max seemed to be looked upon as a leader, for it is absolutely necessary that in every pack of boys some one takes the initiative.  His whole name was Max Hastings, and on numberless occasions he had shown an aptitude for “doing things” when the occasion arose, that gained him the respect of his chums.  For a complete record of these achievements the reader is referred to earlier volumes of this series, where between the covers will be found much interesting and instructive reading.

The third boy of the trio in sight was Toby Jucklin.  While Toby was certainly agile enough when it came to acrobatic stunts, and such things as boys are fond of indulging in, his vocal cords often loved to play sad pranks with his manner of speech.  As the reader has already discovered, Toby was fain to stutter in the most agonizing fashion.  When one of these fits came upon him he would get red in the face, and show the greatest difficulty in framing certain words.  Then all of a sudden, as though taking a grip on himself, Toby would stop short, draw in a long breath, give a sharp whistle, and strange to say, start talking as plainly as the next one.