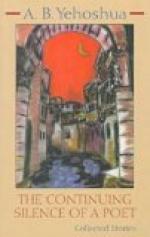 Get Critical Essay by Dov Vardi from Amazon.com
View the Study Pack

A. B. Yehoshua | Criticism

This literature criticism consists of approximately 1 page of analysis & critique of A. B. Yehoshua.

It seems that the Israeli's relentless self-scrutiny since the Yom Kippur War has found [in Ha-me'ahev (The Lover)] a quarry for what is tormenting him: the sham of middle-class life, the inanity of success in enterprise, the infiltration of the economy by Arab hands, militant ultra-orthodoxy, unending reserve duty, the frantic search for missing Israelis, yerida (leaving the country) and, above all, "what happened to us since '48?"

Pirandello-like, the narrative develops through the monologues of six characters, each one like a persona in a morality play….

Yehoshua cuts mercilessly into the Israeli dilemma—winner and loser….

Underlining the Israeli scene, it is the political and social critic in Yehoshua which sets this work somewhere between journalism and complex art. The price he pays is to forgo a deeper search into human action and relationships through subtleties of character. This is only partly compensated for by the fascination...

More summaries and resources for teaching or studying A. B. Yehoshua.

Critical Essay by Dov Vardi from Gale. ©2005-2006 Thomson Gale, a part of the Thomson Corporation. All rights reserved.