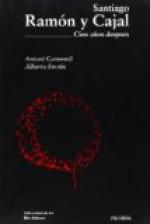 Get Critical Essay by William Carleton Gibson from Amazon.com
View the Study Pack

In the following essay, Gibson details Ramón y Cajal's life, work, and influence on the field of medical science.

The ideal of science is to elucidate the dark mysteries and unknown forces which invest us, for the benefit of our descendants, and to make the world more agreeable and intelligible, while we ourselves are forgotten like the seed in the furrow.—CAJAL.

The beginning of the second half of the nineteenth century saw Helmholz, Ludwig, Virchow and Claude Bernard laying the foundations of scientific medicine. The new discoveries in physiology had been the signal for a concerted study of the minute structures of the body. Little was it realized that a new figure, Ramón y Cajal, had appeared on the horizon, in the far-off village of Petilla in...

Critical Essay by William Carleton Gibson from Gale. ©2005-2006 Thomson Gale, a part of the Thomson Corporation. All rights reserved.