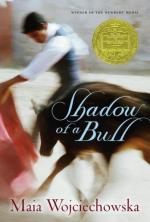 Get Critical Essay by Newsweek from Amazon.com
View the Study Pack

Shadow of a Bull | Criticism

Maia Wojciechowska
This literature criticism consists of approximately 2 pages of analysis & critique of Shadow of a Bull.

["Shadow of a Bull"] is disarmingly simple; yet nuances of feeling continually break through, and their subtlety astonishes the adult reader who supposes that a book for children is necessarily … childish.

"Shadow of a Bull" is the story of Manolo Olivar, age 9 when the tale opens, and 11 when it concludes. He is the son of the man who had been the greatest bullfighter in Spain. (p. 103)

But Manolo lacks the fire of afición, the true love of the archaic contest—the ritual confrontation of a brave man with a brave bull, "the victory of man over death" which the Spanish call la fiesta brava. A sensitive, brooding, introspective boy, he knows this; but he is the son of his father, and that is a great burden as well as an exalted privilege….

A new illumination comes when he assists an old doctor in treating the wounds of...

Critical Essay by Newsweek from Gale. ©2005-2006 Thomson Gale, a part of the Thomson Corporation. All rights reserved.