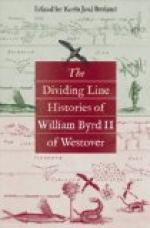 Get Critical Essay by David Smith from Amazon.com
View the Study Pack

The History of the Dividing Line | Criticism

This literature criticism consists of approximately 24 pages of analysis & critique of The History of the Dividing Line.

In the following essay, Smith suggests that the idea of the land survey and the image of the boundary are the central, sustaining metaphors in Byrd's Histories of the Line.

Thus in the beginning all the world was America.

John Locke, “Of Property,” in The Second Treatise of Civil Government (1690)

When John Locke set himself to thinking about a state of nature, it was natural for him to imagine life in “America” as illustrative of most of his arguments. In a state of nature, with vast tracts of wasteland and plenty for everyone, but no private property as such, “every man's possession” was confined to “a very moderate proportion, and such as he might appropriate to himself without injury to anybody in the first ages of the world, when men were more in...

More summaries and resources for teaching or studying The History of the Dividing Line.

Critical Essay by David Smith from Gale. ©2005-2006 Thomson Gale, a part of the Thomson Corporation. All rights reserved.