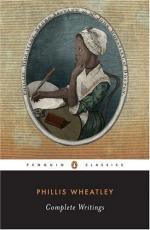 Get Critical Essay by Henry Louis Gates, Jr. from Amazon.com
View the Study Pack
Related Topics
Being Brought From Africa to America

This literature criticism consists of approximately 28 pages of analysis & critique of Phillis Wheatley.

In the following essay, Gates contends that the debate over the "rights of man" that ensued after the publication of Poems on Various Subjects inaugurated practices of literature criticism that still govern readings of African-American literature in the twentieth century.

It is difficult to begin to understand the political and social import that the literature of the African bore in the eighteenth century. A fairly detailed study of the critical reception of Phillis Wheatley by her contemporaries perhaps can enable us to understand the curious extraliterary uses to which black literacy has been put in French and English critical discourse and in the texts of the Afro-American tradition as well.

The matter of the nature of the Negro was one of...

Critical Essay by Henry Louis Gates, Jr. from Gale. ©2005-2006 Thomson Gale, a part of the Thomson Corporation. All rights reserved.