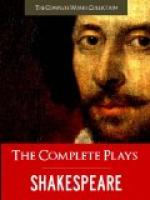 This literature criticism consists of approximately 27 pages of analysis & critique of Shakespeare's plays.

In the following essay, Helms analyzes Shakespeare's treatment of male and female notions of war and honor in Troilus and Cressida.

Throughout Shakespeare's Troilus and Cressida, Thersites' bitter cry echoes and reechoes: “Lechery, lechery, still wars and lechery; nothing else holds fashion” (5.2.194-95). It is a cry from which Shakespeare scholars long turned in disgust, dismissing Troilus and Cressida as vicious and cynical, a cruel misrepresentation of both Homer's heroic warriors and Chaucer's courtly lovers. For commentators who have turned to Troilus and Cressida in the aftermath of twentieth-century wars, the play has become a...

Critical Essay by Lorraine Helms from Gale. ©2005-2006 Thomson Gale, a part of the Thomson Corporation. All rights reserved.